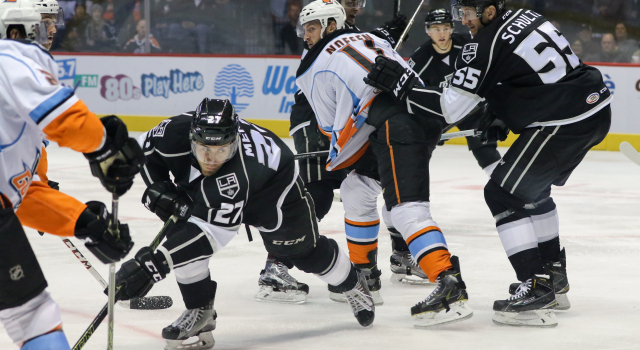 Reign head coach Mike Stothers, on the game having a playoff feel:
We know the season’s winding down. I think now we’ve got 15 left, I think they’ve got 13 left. That will go by in a hurry. We’ve got three more head-to-head matchups with them and all good hockey games we’ve played. So, yeah, tight, tight to the end. That’s the way you want it.

Stothers, on the Reign’s offense:
Well, I thought we moved the puck. We didn’t score enough so I guess you’ve got to say your offense, we needed a little bit more. We needed more than one goal to win the game. But you know what, we battled back and we tied it up. Overtime it can go either way. After that it’s a shootout and to be honest with you I’d rather have it be decided in overtime than a shootout and that’s either way. Even if we were to win in a shootout, I hate those things. They’re ridiculous.

Stothers, on Kempe’s play:
Obviously his goal was huge for us. He looked like a guy who had been off for a little bit, timing was not quite there. His defensive assignment wasn’t great but he’s a young kid. He’s got to learn from those things. He’s got to play in those situations. As good as he is in the other team’s end, we need him to be that good in our end. He’ll learn from it. [Reporter: That’s kind of the nature of 3 on 3 isn’t it?] They’ve got three, we’ve got three, it’s not that hard. [Reporter: Do you feel Kempe is getting better in that area as the season goes on?] Oh yeah, significantly better but there’s still a lot of growth to go for a lot of those young guys. It happens to veteran guys, too. You look one way and a guy jumps by the other way. That’s how goal scorer’s score. You look over here and Ovechkin’s there and then he’s over there and he’s over there. That’s what guys do. Credit to them, their guy scored a nice goal. Our coverage wasn’t quite as tight as it needed to be, that’s all.

Stothers, on the Reign missing the net:
I think we spent the early part of the game shooting high. We weren’t even hitting the net. Their goalie was standing up and we were ringing it over his head and off the glass. You’ve just got to put the puck on the net. Put the puck on the net, make the goalie make the save. So, I think we needed to adjust the sights on our rifles there a little bit, bring it down a little bit. … [Reporter: What was the scouting report on Khudobin?] Shoot lower than we were shooting. The net is 4 by 6, if you don’t hit it then you have zero chance of scoring.

Stothers, on San Diego’s chances:
They get their shots, which they didn’t have all that many but most of them came from us losing defensive zone faceoffs, especially in the first period. Lose ’em and it’s in the back of your net. Lose it again and they’re getting shots. The whole game is we lost defensive zone faceoffs. You keep talking about shooting too high, got to win some draws. Got to win some faceoffs in your end.

Adrian Kempe, on his goal:
I was just trying to rip it as hard as I could, it was nice to see it go in.

Kempe, on what the Reign did well:
We created a lot of chances. We just scored one goal. We had a lot of chances, we had pretty good puck possession. We can always be better. It wasn’t our best game of the whole season but we just kept going and we got a goal at the end there. Unfortunately, we didn’t get the win in overtime but at least we got one point so we’ve got to take that with us.

Kempe, on how he felt in his return:
I think it felt pretty good. It’s always hard to get back after a couple weeks out so I felt a little tired in the legs. I just tried to work hard and play smart and play my game and I think I played pretty well and I got better and better the whole game.

Kempe, on his missed assignment on the OT winner:
I had a long shift there and I should be better. I knew the pass was going to come there and I didn’t have my stick on the ice so that was probably why they scored. [Reporter: Is that the nature of 3 on 3 though?] We’ve been good on 3 on 3 the whole season, we’ve got some really skilled players, we’ve got fast players we can use on 3 on 3.

Kris Newbury, on his game misconduct and what happened:
I don’t know. [The ref] said he gave me a 10 and then I probably said something I shouldn’t have said after that, but at that point I was already frustrated. The guy headlocks Kempe and I come headlock him and then all of a sudden I’m automatically in the penalty box. Just a little frustrating at the point and from here on out got to learn to control it a little better.

Newbury, on the rivalry:
You play them so much you learn to hate them. I mean, it’s our biggest rivalry we have here. I’ve never been in a rivalry where you liked the other team. It gets physical, it gets rough, there’s a lot of chirping. I think at some point the refs should understand and just let us play. I mean, it’s the game of hockey. We’re an hour and a half down the road from each other, it’s going to get rough.

Nic Dowd, on if the game had a playoff-like feel:
I mean they’re a good team. I thought we played pretty well, I thought our power play wasn’t good. That’s got to be a difference in the game. They put us on a 4-on-3, we hit the post. Maybe a couple things go a different way but regardless our power play’s got to show up. If you want to call it playoff mentality, power play wins games in the playoffs so we’ve got to be better at that.

Dowd, on the chippiness:
Yeah, I think both teams expect it. It’s a physical game and guys are fighting for ice out there so I don’t think it’s going to ever change.

Dowd, on having Kempe back:
Just good to have him in the locker room, good to see him again and glad he’s back on the ice. Obviously he’s a presence.

Dowd, on creating chances, but missing the net often:
When you create the chance and you miss it, I think that’s on us. It doesn’t have anything to do with what they’re doing. … We’ve got to bear down. Pucks got to go to the back of the net. Budes can’t be expected to give up one goal every night and not win hockey games. That’s on us, I thought he played really well.

Dowd, on missing out on two points:
I think any time we lose at home on a Saturday is two points missed. I think you can say that about any game at home. I think playing here gives us a big advantage and guys like to be here and our crowd’s great. We’ve got to perform better.