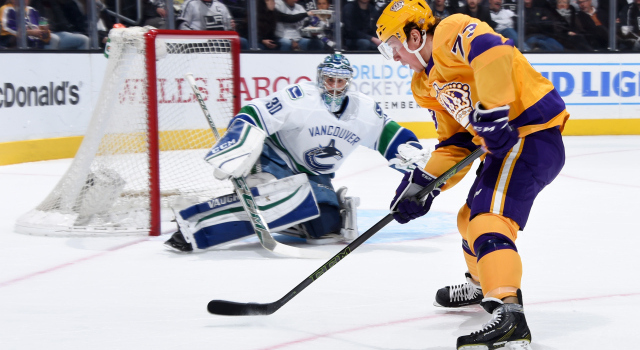 -With the win, Los Angeles improved to 105-98-36 all-time against Vancouver, a record that includes a home mark of 64-39-18. The Kings are 8-3-0 in their last 11 home games against the Canucks and 7-3-1 in their last 11 overall head-to-head games. Los Angeles is now 3-1-0 against Vancouver this season and has clinched a victory in the season series for the third consecutive year. The teams will conclude their season series on April 4 at Rogers Arena.

-The Kings improved to 22-13-2 against the Western Conference and 14-9-0 against the Pacific Division.

-With two goals, Jeff Carter recorded the 299th and 300th goals of his career. His nine shots on goal were the most by a Los Angeles skater this season.

– Anze Kopitar (1-2=3) scored his 20th goal of the season, the eighth time in his career he has recorded a 20-goal campaign. Tonight was his fourth game this season with at least three points. He also extended his point-streak to four games (3-3=6).With 430 career assists, he is one assists behind Bernie Nicholls (431 assists) for fifth place on the club’s all-time assist list.

-In the 11 games since Marian Gaborik was injured, Los Angeles has scored 13 goals and yielded seven in five-on-five play. The Kings outscored the Canucks 3-0 in five-on-five play, with Drew Doughty, Jeff Carter and Vincent Lecavalier scoring in 5×5. (Dan Hamhuis’ goal was scored 4×4.)

-Rob Scuderi registered his second assist since rejoining the Kings. He has 98 assists in his career.

-Dustin Brown has gone nine consecutive games without a point.

Tuesday, March 8 is an off-day for the Kings. The team will return to Toyota Sports Center for a 10:00 a.m. morning skate on Wednesday, March 9.