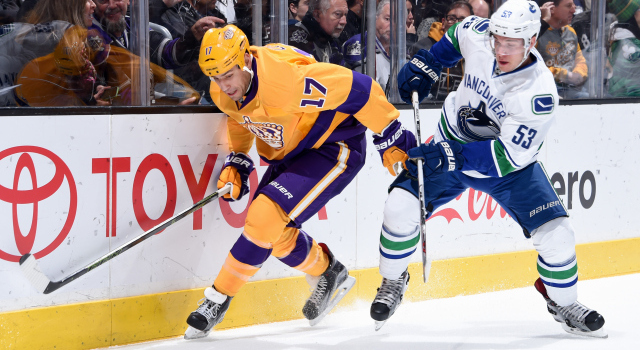 On the win:
We probably played better against Anaheim than we did tonight, but, you know what? It’s a big division game and they’re four points. We get some separation again between us and the fourth place team.

On generating offense:
We’ve played Vancouver three times in our building this year, and that was the first time tonight we scored a five-on-five goal, so that’s an achievement.

On the penalty kill:
Our penalty kill’s been good other than two games against Anaheim. I know there’s critics, but those critics weren’t very good penalty killers, either.

On the decision to play Jeff Carter at right wing:
Just take a little pressure off Jeff. Trying to not necessarily get him going, but take him out of that center routine. In prior years we’ve seen where Kinger and Kopi and Jeff play together, and we’d get them going, so you know what? It worked tonight. Good for him.

On Carter breaking out with offense:
Yeah, that’s what we were just talking about. It’s good to see him score off the wing and use his speed and hit those pockets that he does. [Reporter: Specifically 300, is that a milestone you’ll think about later?] Him? That’s a lot of goals. If you think about it, that’s a lot of goals. Hopefully he’s got a couple hundred more in him.