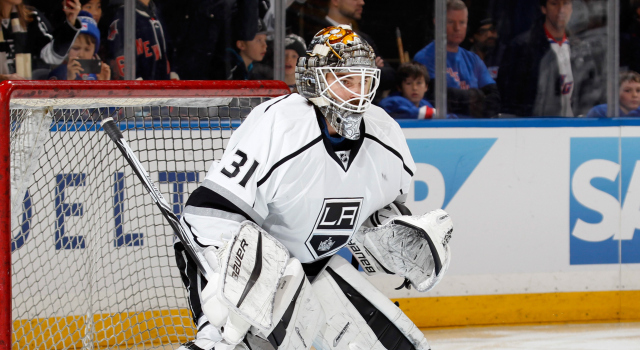 The Kings have signed goaltender Peter Budaj to a one-year extension, the team announced Wednesday. Financial details were not immediately available.

Budaj, 33, is in his first year with the organization, virtually all of which has been spent with AHL-Ontario, where he has posted league-leading and MVP-worthy numbers. In 43 games with the Reign he currently leads the AHL in wins (30), shutouts (8), goals against average (1.60) and save percentage (.934). His 30-10-3 record has Ontario (32-14-3-1, .680 winning percentage) in first place in the Western Conference.

The Banska Bystrica, Slovakia, native was recalled by the Kings during the team’s most recent February road trip due to an injury sustained by Jonathan Quick. During his recall he drew a start against the New York Rangers and earned a win in a 5-4 overtime victory at Madison Square Garden on February 12, making 24 saves.

Reinforcing goaltending depth has been a focus for the organization as of late. The team lost entrenched AHL starter and Calder Cup-winning goalie J-F Berube when he was claimed on waivers by the New York Islanders at the start of the season. A month later, prospect Patrik Bartosak, who was slated to be the Reign’s starter but was recovering from thumb surgery, faced 12 “domestic-related charges” that included allegations of domestic violence and criminal threats, according to the Union Tribune, while on a conditioning assignment in Manchester. He was subsequently suspended by the Kings and is now playing in his native Czech Republic. The club’s only junior-based goalie prospect, Alec Dillon of the Edmonton Oil Kings, has missed most of his season due to a hip injury.

Budaj has appeared in 297 games with Los Angeles, Colorado and Montreal, posting a 125-107-36 record with a 2.76 goals-against average and a .903 save percentage. He remains with AHL-Ontario.