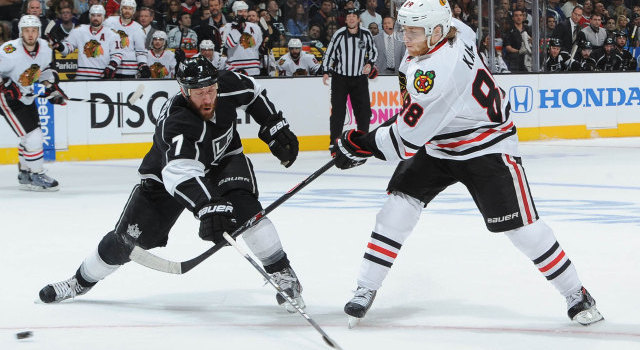 On Saturday morning, Rob Scuderi walked into the Kings’ dressing room for the first time since he exited in early June, 2013, shortly after the club was ousted from the playoffs following a five-game Western Conference Final against the eventual Stanley Cup champion Chicago Blackhawks.

“It’s pretty special for me,” said Scuderi. “It’s been kind of a long 10 weeks since my first trade out of Pittsburgh and getting bumped around a little bit, so it’s nice to come back to some familiar faces and a familiar environment where I had some success, and I’d like to have some more.”

The veteran defenseman who won Stanley Cups in 2009 and 2012 but ended his Kings tenure by signing a four-year contract with the Pittsburgh Penguins in the 2013 off-season due to family considerations is no longer the same type of defender he was earlier in his career. And even if he is no longer the same shutdown-type defenseman capable of playing high-teen minutes as he was in his previous Los Angeles stint, there is still the familiarity between him and the Kings’ coaching staff.

“I think certainly there are some teams that might work better than others depending on the personnel that you have,” he said. “I think here, the coaching staff knows exactly what they’re going to get game-to-game, it doesn’t mean that you can’t try to make adjustments or get better in certain areas, but for the most part they know what they can expect from me and where I’m going to deliver.”

The expectation is that Scuderi is capable of vying for a lighter workload – one around a 14-minute range – as a third-pairing defenseman that offers some stability to the club’s defensive depth. Those in coaching and management have not been enthusiastic about the depth minutes provided by players who had rotated in and out of the fifth and sixth defensive spots this season.

“When you’re into the last quarter of the season, experience is important,” said Darryl Sutter, who also noted that “where he fits, we’ll just see,” and referred to Scuderi as a strong role player.

It’s possible that he’ll make his second Kings debut tonight. Though he wasn’t part of the initial group of players taking a line rush, he didn’t remain on the ice for extra work. There’s a good chance he’ll play.

Rob Scuderi, on his initial reaction to learning about the trade:
I was in Cleveland, we were with Rockford and we were going to play Lake Erie for a couple of games, and they called me in the afternoon. I guess there was a pretty good chance that it was going to happen, and you always get a little nervous, like ‘is it going to happen, is it not going to happen,’ and then I got a call about an hour later that it was pretty much official and that I should start to pack my stuff and start to go. I was definitely the happiest guy in Cleveland. Like I said, I was hoping for an opportunity anywhere in the NHL, but to get to come back to a place that I know people, respect people, and have a chance to regain some success. It was very, very special for me.

Scuderi, on what he thinks he can bring to the team:
I think the same thing I always have, I mean I’ve never been a guy that’s going to rack up points or make a flashy play, but smart, dependable defense, in position, just trying to do the right thing shift by shift. I think I’m still a good penalty killer and still able to provide good role player fundamentals at this level, and I’m looking forward to getting started.

Scuderi, on what Darryl has expressed he wants from him:
Just to be the defenseman I am. When I think back to the first year I came here, that’s what made it so comfortable being here, is that they said ‘we don’t want you to be anything else just because we’re bringing you in on a fairly big contract, we just want you to be yourself,’ and I think that’s what made me feel comfortable then, and that’s the same thing that makes me feel comfortable today, is that I don’t have to try to be anything that I’m not.

Scuderi, on difficulties of moving to different teams and cities:
Yeah it’s tough. You don’t want to be apart [from family] if you don’t have to be, so we got the kids together and we went to Chicago just after New Year’s, and it’s always, I think, odd for them to be the new kid in school and things of that nature, but they’re young, they’ll live, it’s a good experience for later. But to have to turn around and do it again can be tough, but like I said, as long as you have your family with you, that’s all.

Scuderi, on Drew Doughty’s progress:
It’s kind of funny, I mean you know that it’s there and you know that it’s going to happen when you see him in his younger years. It’s nice to see but it hasn’t been a surprise, you can see that his heart and his head were always in the right place, even when he was 19 and 20, and that he would eventually develop into a good leader for this team. It’s great to see, but it’s also not a surprise.

Scuderi, on any nerves in his return to Los Angeles:
Yeah. The fact is, people took a chance on you. When they bring you in, they want you to do well, and even though I’d been here before and had success, there’s no guarantee of that in the future, you have to work for it and you have to earn it. It’s like that 50% nervous, 50% excited, you can’t quite tell the difference, but I’m eager to get to work, I haven’t played a whole lot of hockey and I’m looking forward to getting back on the ice.