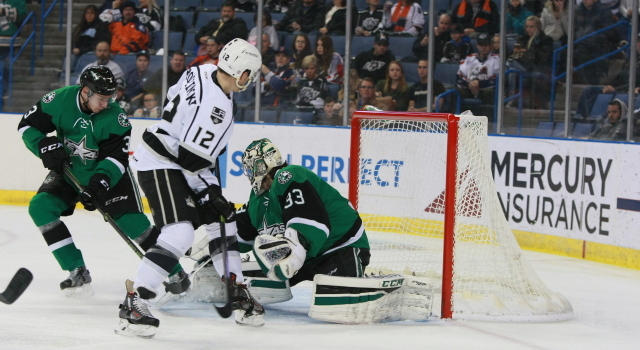 Reign game breakdown
The Reign are leaving Texas with four points. Sean Backman scored two power play goals and rookie Jonny Brodzinski had a three-point night as Ontario defeated the Stars 5-2 on Saturday in the second of a back-to-back. It was the sixth and final regular season meeting between the teams and Pacific-Division leading Ontario (32-14-3-1) improved to 6-0 against Texas (32-20-4-3), the team trailing them in the standings. Ontario took a two-goal lead midway through the first period on goals by Brodzinski and Backman (PP) but the Stars cut into their lead with a close-in goal by Curtis McKenzie. Backman again scored on the power play at 12:19 of the second period to get the lead back to two, but it was short-lived as Reign goalie Peter Budaj gave up a rebound goal to Jason Dickinson with just 9 seconds left in the frame. Jordan Samuels-Thomas added an insurance goal in the third and an empty-netter by Justin Auger rounded out the scoring. Budaj made 24 saves in the win while Maxime Lagace had 22 in a losing effort.

Three stars
–Sean Backman – The veteran right wing broke the Reign’s dismal 0-for-22 streak on the power play with a shot from the point through traffic for his first goal of the game at 10:25 of the opening period. The All-Star scored again from the tops of the circles in the second period, for his third goal of the weekend. Coming into Texas, Backman, a former Star himself, was battling through injury. He skated in just one practice before the team traveled but he managed to put together a gutsy four-point weekend.
–Jonny Brodzinski – The rookie was a factor in all of Ontario’s first three goals and gave his team the all-important first one on a high shot while zipping down the left wing. Earning first-unit power play time to replace an injured Adrian Kempe, Brodzinski picked up secondary assists on both of Backman’s goals for his first three-point game as a pro.
that gave the Reign the important first goal on a shot from the left circle that beat Lagace. It
–Peter Budaj – In a pivotal third after giving up a late goal to end the second, the veteran netminder held Texas scoreless in the last 20 minutes. On the weekend, Budaj picked up two wins by stopping 45 shots. Budaj held Texas, a team that averaged 3.74 goals per game coming into the back-to-back, to two goals in both games. In the process he padded his own AHL-leading stats (1.60 GAA, .934 SV%) and grabbed his 30th victory.

Turning point
Entering the third already having to a kill a penalty due to some after-the-horn festivities to end the second, Nic Dowd took an early tripping penalty which forced the Reign into a 5-on-3 for 1:12. For the Stars it was a prime opportunity but Budaj (who took a shot off his mask from Dickinson) and the penalty killers in front of him stopped the two-man advantage and what was left of the one-man advantage to set the tone for the final frame.

Stat fact
–1 – Assist for Matt Leitner, a recent call-up from Manchester and a California native hailing from Los Alamitos. His first pro point in his second AHL game was the secondary assist on Samuels-Thomas’ third period goal that gave the Reign a two-goal cushion.

Next up
The Reign are in the midst of road games, but will return to Ontario to get a few days of practice in before playing at San Antonio next Sunday and the following Wednesday.