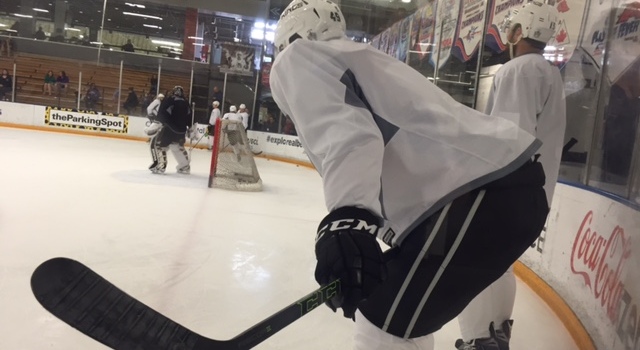 Good morning from Toyota Sports Center on a day the Kings will be hosting the Sabres in the visitors’ only Staples Center appearance this season (8:00 p.m. / FOX Sports West / KABC 790 / I Heart Radio). The reason for the 8:00 p.m. start time is this:

-The Kings took the ice shortly before 10:00 a.m. and aligned as such:

-Jhonas Enroth left the ice first and is expected to draw the start against his former team. He stopped 28-of-30 shots in a strong performance at the First Niagara Center that resulted in a 2-1 overtime loss to the Sabres on December 12.

-Though Brayden McNabb and Jamie McBain took the first rotation together during line rushes, Rob Scuderi came off the ice first, while McBain and Michael Mersch remained on the ice for a little bit of extra work with Jonathan Quick. We’ll wait to see if Darryl Sutter reveals any lineup hints, but it’s definitely possible that Scuderi returns to the lineup tonight. Expect to see an extra body or two in warm-ups.

-Speaking of Scuderi, he called himself “definitely the happiest guy in Cleveland” – he was on a road trip there with AHL-Rockford – when he learned that the trade between Los Angeles and Chicago was nearing completion. “I think here, the coaching staff knows exactly what they’re going to get game-to-game,” he said. “It doesn’t mean you can’t try to make adjustments or get better in certain areas, but for the most part they know what they can expect from me and where I’m going to deliver.” Story to come, obviously.

-The Sabres won 3-1 in San Jose last night, continuing their one-sided dominance of their series against the Sharks. (San Jose did win in Buffalo earlier this season, though.) Though Chad Johnson earned the win last night, expect to see big Robin Lehner in goal. The 6-foot-4 Swede has been excellent this season since returning from an early season injury and has allowed either no goals or one goal in four of his last five starts. Buffalo is holding an optional morning skate at 11:30 a.m. at Staples Center, for what it’s worth.

-PODCAST! Jesse Cohen and I talk about the Scuderi trade and turn our attention to a Kings trade for a forward that has been coming together but was held up temporarily last night. (Darren Dreger noted this morning that both Teddy Purcell AND Justin Schultz would be included in the hypothetical trade with Edmonton, though I’ve only heard Purcell’s name mentioned by Kings management to this point.)