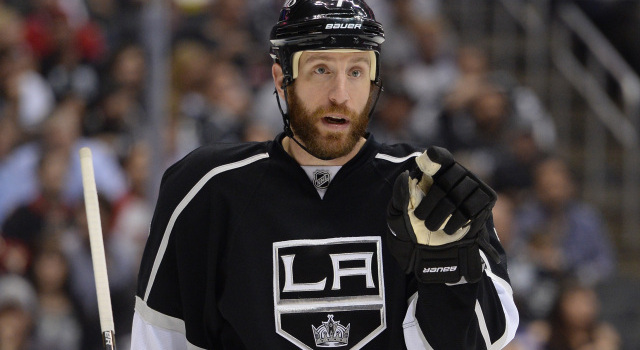 LA Kings Insider has learned the Kings and Blackhawks are close to finalizing a swap of Rob Scuderi and Christian Ehrhoff, with both teams retaining a different degree of salary cap space in a move that has some complexity of salary cap implications. Both players had been playing for their parent club’s AHL affiliates at the time of the trade.

Updates on this trade were also reported by Bob McKenzie, Mark Lazerus and Lisa Dillman.

For some context, the Kings, as has been reported on this space and elsewhere, have not been particularly enthusiastic about the depth of their defensive corps, namely the third pairing. They see Scuderi as someone capable of contributing low-teen minutes in a reduced role from his previous tenure with the team but in a somewhat similar array of situations. In 42 games this season, Scuderi has four assists and a minus-two rating; in 762 career regular season games, the 2009 and 2012 Stanley Cup winner has eight goals and 104 points. He has appeared in 117 career playoff games.

In 2013, Scuderi signed a four-year contract with Pittsburgh with an average annual value of $3.375-million. Upon his trade to Chicago, the Penguins retained one-third of his cap hit, which meant that the Blackhawks’ cap hit was $2.25M. At this point, it is unclear how much the Kings will be on the hook for cap-wise, though the defenseman has one year remaining on his contract.

Ehrhoff, who according to a source had also entertained an overture from Chicago last summer, recorded two goals, 10 points and a minus-10 rating in 40 games with Los Angeles. In 781 career games, the 33-year-old has totaled 74 goals and 337 points.

There’s plenty more to come on this subject later today.