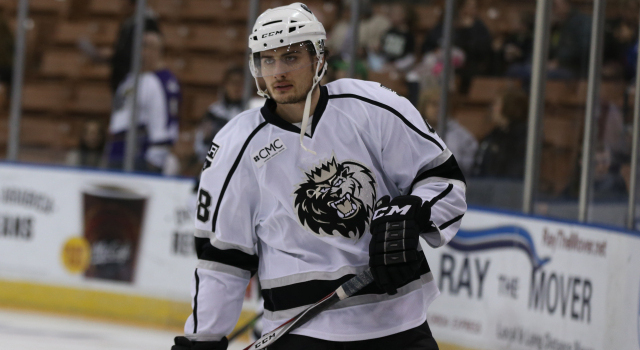 The Reign have recalled forwards Maxim Kitsyn, Matt Leitner and Scott Sabourin from the Manchester Monarchs, the team announced on Thursday.

Sabourin had his conditioning assignment in Manchester cut short and is rejoining the Reign. Ontario plays the Stars, the affiliate of the Dallas Stars, in a back-to-back starting Friday night in Texas. Sabourin went pointless in three games with the Monarchs and has three goals and two assists in 26 games with the Reign.

This is Kitsyn and Leitner’s first call-ups to the Reign this season. The moves come a day after the news was official that forwards Adrian Kempe and Paul Bissonnette would not travel to Texas due to injury. Reign head coach Mike Stothers hinted on Wednesday that some reinforcements would be coming from Manchester, and likely forwards. Defenseman Zach Leslie remains with the Monarchs to finish up his conditioning assignment.

Kitsyn, 24, leads the Monarchs in goals with 23 and is second on the team in points (45) behind Leitner. He leaves Manchester on a 13-game point streak and a four-game goal streak. Kitsyn has eight goals in nine games in the month of February. The Novokuznetsk, Russia, native is a 2010 draft pick by the Kings, selected in the sixth round with the 158th pick. He played in seven games last season when the Kings’ AHL affiliate still resided in Manchester, registering one goal.

The Los Alamitos, Calif., native, Leitner has nearly been a point per game player for the Monarchs this season with 49 points (12 goals, 37 assists) in 51 games. His 49 points are second among ECHL rookies. The undrafted Leitner played collegiately at Minnesota State University-Mankato as the Mavericks won WCHA titles in 2014 and 2015.