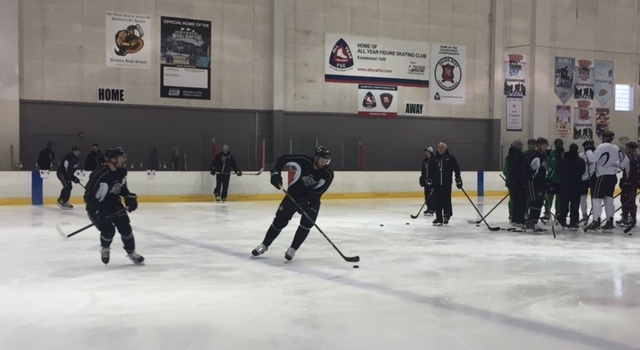 Notes from today’s 11:15 a.m. development day/practice skate at Center Ice in Ontario, the day before the Reign embark to Texas for a back-to-back with the Stars on Friday and Saturday.

–Adrian Kempe (upper-body injury) did not practice for a third straight day and will not travel with the team to Texas, head coach Mike Stothers said. The Kings’ top pick in the 2014 draft was injured last Friday in a collision with teammate Derek Forbort, according to Stothers. He dressed in last Saturday’s loss to San Diego but only for the purpose of serving any possible bench penalties. Kempe has 8 goals and 13 assists in 38 games this season but has been held without a goal in his last 17 games. He had to sit out last Wednesday’s game due to illness as well, so it’s been a rough week for the Swede. So could this time off potentially be a good thing for Kempe? “There’s two ways of looking at it, you could look at it as sometimes you need to step away but I think in his case it’s very unfortunate because I think he needed to work his way through it,” Stothers said of the slump. “Wrong time to be sick and miss a game and it’s unfortunate. You can never predict injuries but he has the potential to be a point producer for us, whether it’s scoring or making plays. For a team that doesn’t score naturally or easily, that’s a big loss. At some point you keep saying to yourself and probably he’s doing the same thing, sooner or later I’m going to break out of this. I would prefer that he was actually playing and had the opportunity to work his way through it and get back on track, but there’s nothing we can do about it now. Now we’ve got to make sure he can get back to 100 percent healthy.”

–Members of the Kings’ development staff were on ice and working with the players for the first portion of practice. Mike O’Connell and Sean O’Donnell ran drills with the defensemen while Nelson Emerson, Mike Donnelly, Glen Murray and goalie coach Dusty Imoo stuck with the forwards. The first half of practice ran for 30 minutes before the veterans joined in. Forwards Kris Newbury, Sean Backman and defensemen Christian Ehrhoff and Jeff Schultz trickled in as the development portion went on and joined the team for the second half of practice.

–Backman had to leave last Saturday’s game against San Diego with a lower body injury with what he said was a “tweak here, a tweak there, nothing too serious.” He skated for the first time all week on Wednesday. “I think everything went OK, so he should be fine, hopefully,” said Stothers, who admitted the right wing is still “questionable,” for the trip. Backman leads the team in points with 38 (13 G, 25 A) and is one of only four players (Nic Dowd, Vincent LoVerde and Justin Auger) to skate in all 48 games this season. “Today was good,” Backman said of practice. “Scored a few goals, I felt good out there though. This time of year it’s good to get some rest, some days off, so I think it will just help out in the long run.”

–Forward Scott Sabourin and defenseman Zach Leslie remain with Manchester on a conditioning assignment but Stothers hinted that Sabourin or another forward could be joining the team in Texas. “There’s a strong possibility that we’ll be recalling some reinforcements from Manchester, would more likely be of the forward variety … I think the intent there would be for Les to finish out the five games that he was scheduled for and make sure he’s getting some good playing time so that when he does come back he’s ready to jump into the fray,” Stothers said.

–Paul Bissonnette (injury) has not practiced this week and will also not travel with the team to Texas. It’s been a injury-plagued season for the veteran, who’s missed 13 of an available 48 games due to various ailments.

–The second half of practice, started with a twist and drills went out of one end the rest of the way:

Annnnd this just happened. Not sure who the culprit is … pic.twitter.com/NVkZccH0pT

–Defenseman Kevin Raine scored his first goal of the season in last Saturday’s 4-2 loss to San Diego, plugging into a forward role due to injuries on the squad. “It was nice to get the monkey off the back, been waiting a long time to finally pop one in,” Raine said. “Felt good, forgot what it felt like to score.” Raine played a few games last year at forward, so he said he felt comfortable making the switch. “I think my skating allows me to do that,” he said. “I use my strengths and stick to what I know and just get pucks deep and keep it simple.”