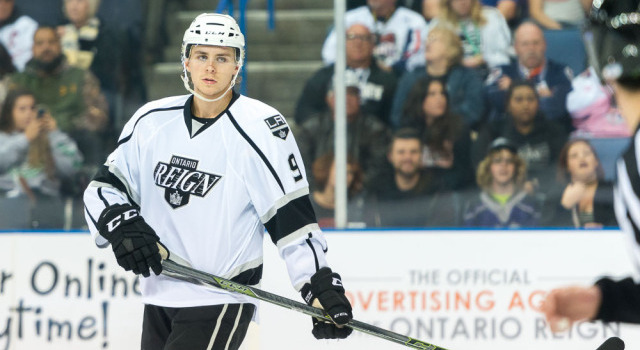 Reign forward Adrian Kempe was injured in Friday’s 4-1 win over Texas in Ontario. The top prospect for the Kings dressed in Saturday’s 4-2 loss to San Diego, but did not play.

Reign head coach Mike Stothers said via text on Saturday night that Kempe was injured in Friday’s first period on a collision with teammate Derek Forbort when the defenseman was stepping up to check a Texas player. Kempe finished the game but had no points and no shots on goal.

Stothers told the Reign’s communications head Joey Zakrzewski before Saturday’s game that it’s an upper body ailment for the 19-year-old and the coach believes “Kempe will be fine,” and that the injury “shouldn’t be too, too bad.” It will be addressed on Monday after the team’s recovery day on Sunday.

Kempe dressed Saturday but Stothers had him only in the lineup to serve any possible bench penalties. He did not play on Wednesday due to illness. Kempe, the Kings’ first-round pick at No. 29 of the 2014 draft, has 8 goals and 13 assists in 39 games this season but has been held without a goal in his last 17.