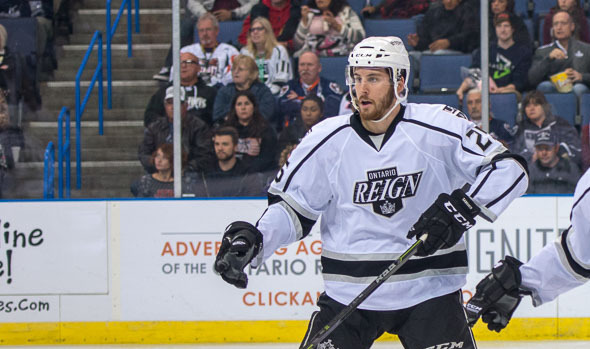 The Reign have sent forward Scott Sabourin and defenseman Zach Leslie to the Manchester Monarchs on a conditioning assignment.

The Monarchs, the Kings’ ECHL affiliate, have a weekend homestand where they host Reading tonight followed by Elmira on Sunday afternoon. Both players have been seldom used in the Reign lineup as of late, so it’s an opportunity for both to get some extra games in.

Sabourin, 23, played in Wednesday’s game against Stockton but was a healthy scratch the previous 16. The Orleans, Ontario, native has three goals and two assists in 26 games with the Reign this season.

“I’m sure [Sabourin] would like to play a lot more than he has been and I would like to play him a lot more than he has,” Reign head coach Mike Stothers said after Wednesday’s win over Stockton. “So, it’s a work in progress but I can tell you one thing, he’s a terrific individual, he’s a hard-working guy. Whether he’s in the lineup or he’s not in the lineup he’s a great teammate. … As you saw tonight, he hasn’t played in a month, went out and played a real good game for us. That’s what you need to do.”

Leslie has seen his chances of squeaking into the defensive mix decrease since the addition of Christian Ehrhoff and the recent return of Nick Ebert from an upper-body injury. A sixth-round draft pick by the Kings in 2013, Leslie has played in 21 games for the Reign this season, logging four assists. After suiting up in 13 games in January, the Ottawa native has been a healthy scratch the last four, last playing on Feb. 10 against San Jose.