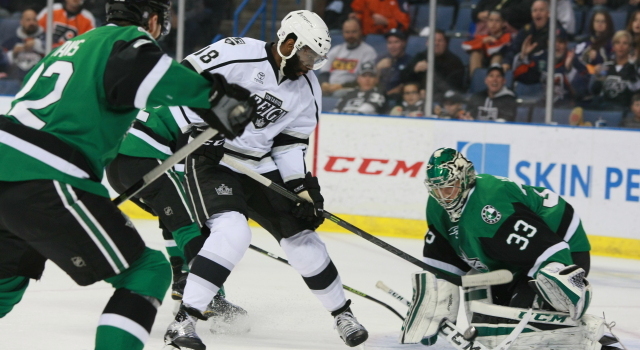 Reign game breakdown
Powered by two third period goals by Vincent LoVerde and Jonny Brodzinski, the Reign battled to beat a tough Texas team 4-1 on Friday night in Ontario. The Pacific Division-leading Reign improved to 4-0 against the second-place Stars and 30-13-3-1 overall, earning an important win and breaking a 6-game winning streak for Texas (31-19-3-3) in the process. The news started in warmups as it was noticed that Michael Mersch was not taking part. It was learned shortly thereafter through Kings hockey operations that he’d been called up to the parent club. The Reign did just fine without him. Jordan Samuels-Thomas scored the game’s opening goal on a backhanded shot at 7:46 of the second period as the Reign finally solved Texas goalie Maxime Lagace. Prior to that, the Reign had two clear-cut opportunities on Lagace, one for Andrew Crescenzi in the first period and again early in the second for Valentin Zykov. But as soon as the Reign got the lead, they surrendered it 1:10 later when Curtis McKenzie fought off pressure from Christian Ehrhoff and managed to poke the puck to Jason Dickinson who flicked it high by Reign goalie Peter Budaj. With 1:29 left in the second, Budaj preserved a 1-1 tie by stopping Brett Ritchie on a breakaway and subsequent penalty shot after it was ruled LoVerde had hooked the Texas forward. The Reign then took over in the final period as a point shot from LoVerde at 3:46 gave put them up 2-1. The captain’s tally was followed by a rebound effort for Brodzinski minutes later. In the midst of power play opportunity with Justin Auger in the box, Texas opted to pull Lagace, resulting in an empty-netter by Crescenzi with 3:27 left in regulation. Lagace had 31 saves in the losing effort while Budaj countered with 21.

Best quote
Reign head coach Mike Stothers, on his text message conversation with Mersch before he left to join Kings: “Actually he reached out to me first because he said, ‘good luck tonight, wish the boys well.’ And I said, ‘good luck to you and you better not come through these doors ever again.’ And then I sent one of those — what do you call it? — emoji. I gave him the old thumbs up. Then he said something else about he hopes he won’t come back. I said, “well you’ve done a pretty good job of listening to me so far, so if you come back I’m going to be pissed off at ya.” And then he said, “I don’t want that.” So I think we’ve seen the last of Merschy. I don’t know, I hope it is. He’s done everything he can do at this level. I think he’s ready to play, whether or not they think that, I don’t know. He’s such a good person and such a good hockey player. I really do feel, and that’s me being partial maybe, I really feel he can help ’em. I think he can be a big part of their team in going forward and trying to remain in first place and getting themselves going and hopefully win another Stanley Cup.”

Three stars
–Jordan Samuels-Thomas – The third liner’s goal broke the 0-0 tie and it was a nifty backhand move at that. After Crescenzi won a faceoff, the 6-foot-4 winger got the puck along the near boards and powered his way to the slot before going to his backhand and roofing the puck past Lagace. The first goal was an important one as it proved to the Reign that they could get one by the hot Texas goalie, not to mention the Reign came in at 22-0-1-0 when scoring the first goal. It was Samuels-Thomas’ second goal in as many games and ninth of the season.
–Vincent LoVerde – The captain’s slap shot goal from the point 3:46 into the third period gave the Reign a 2-1 lead. It was his sixth of the season and his second game-winner. A strong forcheck by Nic Dowd set up LoVerde, as the center worked through a hard check at the far boards before turning and finding LoVerde just inside the blue line. LoVerde waited, then wound up, beating Lagace high. It was noted after the game that goaltending coach Dusty Imoo’s scouting report on Lagace was to go upstairs and all three Reign goals were scored that way with the exception of Crescenzi’s empty-netter.
–Peter Budaj – In Wednesday’s 6-1 win over Stockton, Budaj made his return from his stint with the Kings and had a relaxing evening. On Friday night against high-powered Texas offense it was time to put the hard hat back on. Budaj made 21 saves to earn his AHL-leading 28th win. His night was highlighted by a penalty shot save on Ritchie’s forehand to backhand move with 1:29 left in the second period to keep the score 1-1. He was pressured again early in the third before LoVerde’s go-ahead goal, but kept Texas off the board which dropped his league-leading goals against average to an eye-popping 1.55.

Turning point
Brodzinski’s second-attempt effort for his 8th goal of the season gave the Reign a two-goal cushion 5:13 into the third period. The rookie out of St. Cloud State tipped a shot by Ehrhoff and gathered his own rebound to beat Lagace in what was a great individual effort.

Stat fact
–10 – Goals in the last two games for the Reign after being held to just four in a three-game losing streak prior to Wednesday’s 6-1 win over Stockton.

This and that off-ice
Mersch, the team’s leading goal scorer with 19 goals, has earned his second NHL call-up to the Kings, joining his roommate Kevin Gravel, who’s also up with the team currently.

Next up
The Reign hit a road swing for what will be their longest time spent away from CBBA this season. It starts Saturday with a 7 p.m. game against San Diego and then they’ll travel to Texas next week and San Antonio the following week. The next home game is March 12 against San Diego.