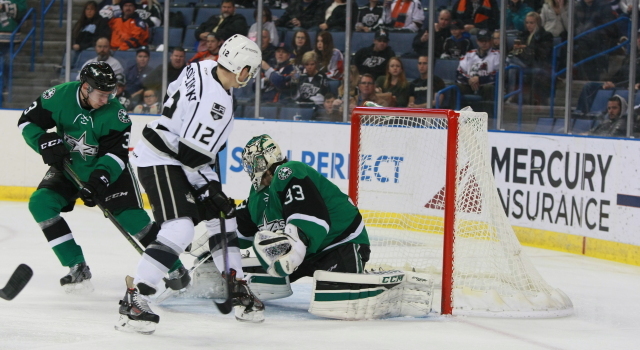 Reign head coach Mike Stothers, on his team’s mastery of Texas this season:
I don’t know how to explain it. When we play them they strike fear into me just because of their speed and their skill. We’ve played well so far against them. They’re a team that they’re never out of it. Even when you think you have a lead they can strike quick. … You’ve got to play a full 60 to beat those guys.

Stothers, on Mersch’s call-up to the Kings and what he said to him:
Actually he reached out to me first because he said, “good luck tonight, wish the boys well.” And I said, “good luck to you and you better not come through these doors ever again.” And then I sent one of those — what do you call it? — emoji. I gave him the old thumbs up. Then he said something else about he hopes he won’t come back. I said, “well you’ve done a pretty good job of listening to me so far, so if you come back I’m going to be pissed off at ya.” And then he said, “I don’t want that.” So I think we’ve seen the last of Merschy. I don’t know, I hope it is. He’s done everything he can do at this level. I think he’s ready to play, whether or not they think that, I don’t know. He’s such a good person and such a good hockey player. I really do feel, and that’s me being partial maybe, I really feel he can help ’em. I think he can be a big part of their team in going forward and trying to remain in first place and getting themselves going and hopefully win another Stanley Cup.

Stothers, on if he’s getting what he wants out of Kempe:
He’s gone 16 games now without scoring a goal, what do you think? [Reporter: Is he getting enough chances though?] If you get enough chances, sooner or later they go in. … At the end of the night he had zero goals, zero assists, zero points, zero shots. That’s reflective of the result then isn’t it? … Kempe, he’s playing in special teams, 5-on-5, 4-on-4, that’s a long time to not contribute with a goal. So, yeah, I’m expecting more. I expect more, I demand more, we want more.

Stothers, on two wins at home before a long road trip:
We’re comfortable playing at home. Our home games are few and far between between now and the end of the season. It’s always nice to get a couple wins before you know you’re going on the road. But, if you want to be taken seriously for playoffs, you need to win on the road. We’ve done OK up to this point. This will be a good test for us. But everything’s a test. We’ve got 21 games left. After this weekend it’s the final 20 games. That’s going to go by in the blink of an eye whether you’re at home or on the road. I’m kind of looking forward to it. We’ve got a couple Texas trips, one to Texas, one to San Antonio, that’s kind of nice. San Jose one where we’ve got a couple days in between. It’s good for the guys. When you get away, get to be together, have some dinners together. Usually there’s a lot of laughs on the road, so we always look forward to that. It’s not that bad.

Stothers, on solving the Texas goalie:
Dusty Imoo our goalie coach had mentioned we’ve got to get it up top. Between the second and third I said, “guys, we’ve got to get it up.” I don’t know why it’s such a problem. When we shoot against our own goalies we’re always ringing ’em around their ears. We go high all the time. It’s off the glass, it’s off the bar. Hits Budes in the collar bone, hits Houser in the head. And tonight we weren’t getting it up. We got it up, we got a couple of goals. When a guy’s that good down low with his feet and his pads, you’ve got to get it up. And we were able to do so. Vinny’s shot was unbelievable, that was a great pass by Dowder but holy smokes that was unreal. And then Brodz, he throws one up top. It was great.

Stothers, on the reason Bissonnette left the game:
He has a upper-body injury into the mid-range region. He has some issues. [Reporter: Was it something that happened tonight, or lingering?] God only knows with Biss. He plays hard. He came up a little lame, so, again to let things settle down. No sense rushing it. I doubt that he’s going to have things settle down enough where he can play tomorrow but we’ll see tomorrow morning.

Nic Dowd, on the importance of beating second-place Texas:
It was big. I don’t know how many guys may have realized that they were creeping right up behind us but I think any time you play a rival team that’s in your conference those points are huge. So, tomorrow night will be just as important as tonight. I think that’s a really good test because that’s a really good team. The score’s 4-1 but easily could have just been 2-1. Peter played awesome night as he always does.

Jordan Samuels-Thomas, on his goal:
Cres wins all his draws for the most part. He wins it again and goes to the D-man and I pop out and no one really came to me and I had a lane to the net and just a backhand shot. [Reporter: Must have felt good though after the team couldn’t beat Lagace on some really good saves.] For sure, we’ve wanted to start scoring first so it was nice to score first. The goalie was playing great. Even after that goal he played well in the second and third. Any time you get anything past a good goalie, that gives your team confidence.

Jonny Brodzinski, on breaking through in the third period:
I felt like we played pretty well the first two periods, kind of a back-and-forth game. A lot of neutral zone, a lot of power plays, stuff like that. So there was really no flow to the game. Third period coach came in he just said we’ve been playing pretty good hockey for both periods and now we’ve just got to capitalize on our opportunities and I think that’s what we did.

Brodzinski, on the importance of beating second-place Texas:
Yeah. I think every game’s important now, coming on this final stretch here. Especially these guys, though. They’re a very quick team, they’re very similar to us in that aspect. They know how to score goals. I think that was something to take away from this game, how good we played defensively.

Andrew Crescenzi, on the team’s dominance of Texas this season:
Not sure. We try to play strong defensively because we know they’re really talented up front. They’re a fast team so we have to match their speed. I think playing in their zone kind of helps because they can’t transition and score against us.