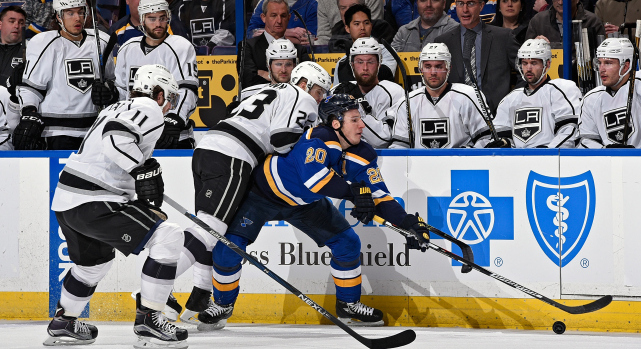 Anze Kopitar’s final shift of Thursday’s 2-1 overtime loss to the St. Louis Blues finished with under a minute remaining in the first period. He did not join the team on the bench to begin the second period and was ruled “questionable” to return with what was described as a lower-body injury by a team spokesman. Darryl Sutter did not shine any light on the nature or severity of the injury after the game.

“No,” Sutter said when asked if he had an update on Kopitar’s status. “It doesn’t come, injuries, from the head coach.”

There were no indications of where or when the injury occurred. He didn’t appear to be on the receiving end of any hard hits and did not visibly skate gingerly to the bench at any point, favoring any part of his body. The one hit he received, according to the game’s play by play log, came 17 seconds into the game and was administered by Carl Gunnarson. He played eight additional shifts after that incident.

This is the second time this season Kopitar had to leave a game in St. Louis early. On November 3, he weathered high contact from Ryan Reaves and left the game in the first period in a 3-0 Los Angeles win.

The 28-year-old center has been remarkably durable in his career. Since missing the final seven games and all six playoff games at the end of the 2010-11 season after breaking his ankle, he has missed at most three games in any season – in 2014-15 – and appeared in all 57 games this season, though shortly prior to the resumption of play during the 2012-13 NHL lockout, Kopitar suffered a knee injury playing in Sweden and missed the first game of the season upon his return to Los Angeles.

By now you’re aware of what happens when a player leaves a game due to injury. After Sutter declines to provide an update after the game, the general sense of the severity of the injury usually comes the next day. Sutter prefers to have three four states of availability: Healthy, day-to-day, long-term, and injured reserve. An update on his status should probably come tomorrow.

Sutter in shut-down mode about Kopitar injury. Know this will surprise no one but at least an attempt was made. In fact, two…

Darryl Sutter, on killing off a late five-on-three power play:
I think both teams’ power plays and penalty kills were a big part of it. We play each other like playoff games.

Sutter, on it being hard “not to smile” at the goaltending match-up:
Well, I’m not smiling because the other team’s goalie played well. [Reporter: Aw, come on, as a hockey lifer, you don’t smile when the other guy plays well?] I’d like to win, two-one. We’re trying to make the playoffs. Same as St. Louis. Teams play playoff hockey. We’re just trying to get to playoffs.

Sutter, on the atmosphere and intensity of the game:
Both teams, as I say, play similar-type games.

Sutter, on Jonathan Quick’s performance:
To make playoffs your goaltender’s got to be good.