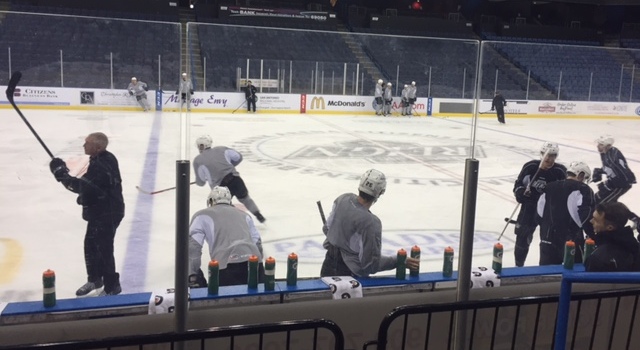 A few notes from the Reign’s 10 a.m. morning skate at Citizens Business Bank Arena before they host the Stockton Heat tonight at 7 p.m.

–Forward Adrian Kempe is ill and was the only Reign player not on the ice this morning. It’s not expected that he’ll be in the lineup tonight. “He is ill today,” Stothers said. “He came in this morning, wasn’t feeling right, so sent him home.” Kempe has eight goals and 13 assists in 37 games this season. He has not scored since Jan. 8 against Stockton, which was his first game back from World Juniors. This will be his first game missed with the team that’s not due to time spent at the WJC. “No,” said Stothers, when asked if he thought Kempe would play. “We sent him home to see how he’s going to feel later but it’s kind of hard to do when you’ve got healthy guys and if he is under the weather, gets worn out more, wore down, makes it worse. If we can nip it in the bud maybe it’s only one game, that’s great. If we can keep it away from everybody else, even better.” Kempe has been skating with Kris Newbury and Sean Backman.

–Defenseman Nick Ebert, who has missed 16 games and last played on Jan. 5, will be making his return. Ebert had been out with an upper-body injury and tonight will be paired with veteran Jeff Schultz, according to Stothers. Ebert said he started skating about two weeks ago and was without contact for half and with contact for the latter half. “I feel great,” he said. “I’m ready to go tonight. Obviously it’s been a little bit longer of a layoff, longer than I thought it was going to be initially. I’m just excited to be back and hopefully can contribute.”

–Goalie Michael Houser was the first off the ice and is expected to make his fourth straight start. He’s 0-3 since starting in place of Peter Budaj (who is now on his way back to Ontario from the Kings, as reported this morning by LA Kings Insider Jon Rosen) but has the opportunity to change that tonight. “Up and down I guess,” Houser said when asked to assess his play. “San Jose I wasn’t very sharp I didn’t think. Bakersfield a little bit better and Stockton I thought I was OK. Overall, been getting better each game but that’s kind of looking at it as a silver lining I guess because we’ve lost all three. From that point it’s not really acceptable. I know I need to be better and that’s all there is.” In the three-game skid Houser has losses of 4-2 vs San Jose (22 saves), 3-2 vs Bakersfield (14 saves), 3-0 vs Stockton (16 saves). The Reign have given up the first goal in each of those games. “Well, it’s nice that we saw [Stockton] the other day,” Houser said. “They have some skill over there, they have some good players. I just want to make sure I’m ready off the hop. We’ve been spotting teams a couple early ones and I think that’s been biting us pretty good. I think the first 10 minutes is huge, especially because we’re at home now. We need to get the first one, seems like we haven’t had the first goal in a little while. I think if we come out and get the first one we’ll be fine.”

–As it correlates to the above nugget on Houser, Stothers does not appear to be placing blame on the goaltender for the Reign’s three-game skid. Ontario has just four goals in those three games and are risking a four-game skid, which would be the longest for the team all season. “I don’t care who’s in net, you’ve got to score,” Stothers said, later adding, “[Houser’s] been OK, I don’t think you can fault him.” So, there’s been a clear focus on one aspect this week. “Scoring, that would be nice,” Stothers said. “Get a couple pucks in. We’ve scored a grand total of four goals in the three losses. … We’ve gotta score. We’re taking enough shots but perhaps we’re not hanging around for the second and third opportunities if they present themselves. Perhaps we’re not getting enough traffic in front. If you can shoot it and the goalie can see it, he’s going to make the save. Every team has good goaltending, so you’ve got to make it difficult for the goalie.”

–Nic Dowd took a hard hit in the team’s last game on Saturday against Stockton from Garnet Hathaway. As a result, Dowd had to exit the game late in the first period, returning to start the second. “I don’t think it was anything on purpose, I just think it was a hockey play,” Dowd said. “Whether it was a penalty or not, I don’t know but my head hit the dasher and obviously feeling woozy there for a second. Took the right protocol and everything turned out all right.” Dowd, who is tied for the team points lead at 35 with Backman, said he’s feeling just fine this week, but has been battling allergies.

–After about 20 minutes of full-ice drills, the forwards and defensemen split up. Forwards worked on 2-on-0s while the D were with assistant Chris Hajt focusing on shots from the point. As Stothers said and was noted previously, “scoring,” has been the emphasis all week.