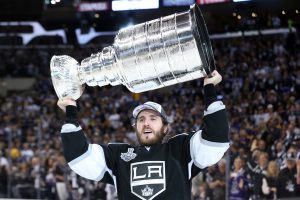 LOS ANGELES, CA – JUNE 13: Mike Richards #10 of the Los Angeles Kings celebrates with the Stanley Cup after the Kings 3-2 double overtime victory against the New York Rangers in Game Five of the 2014 Stanley Cup Final at Staples Center on June 13, 2014 in Los Angeles, California. (Photo by Bruce Bennett/Getty Images)

By LA Kings Insider
0 Comments
Behind the Scenes