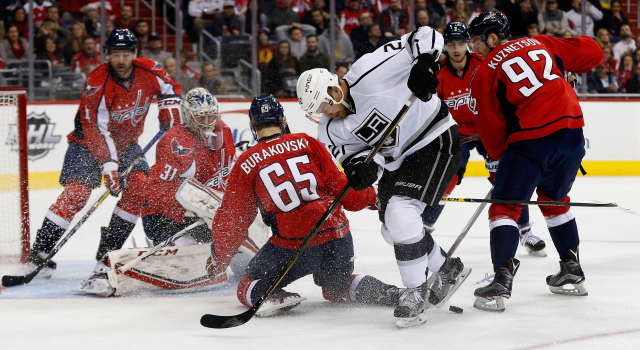 Dustin Brown, on the Washington Capitals:
They are a team that has been together for a long time. We have to bear down on our chances, that’s the difference tonight. We had some really good looks, they just have to go in the back of the net for us, especially when we have a 1-0 lead. If we can find a way to get that next goal, that game is going to be a lot different. They poured it on in the third period and as a result they got the goals they needed.

Brown, on missed opportunities:
Like I said, we know how to win. We had a really good first and second period. It really comes down to burying our chances. Coming out of this game, it’s definitely not the result we want, but we have to stay with the mindset we had tonight, and focus on finishing those chances.

Brown, on the road trip:
We are in the situation where we need to find points. There are definitely areas that we can improve on. That’s something we need to focus on in practice to

Drew Doughty, on playing Washington:
If we get to the Stanley Cup final there is a good chance they will be there too. We were excited to play this team and excited to hopefully win this game. I thought we played ok, but bottom line is we have to score goals and we have to win games, and right now we are not.

Doughty, on frustrations of not scoring with the chances tonight:
We have to score. Guys on our team are getting a lot chances, we are going to the net, we are doing the right things to create chances, but the bottom line is we just have to bear-down and put them in. We have been struggling to score lately, and it’s been hurting us. I think we wasted our goals in the Boston game. We just need to bear-down and put the puck in the net.

Doughty, on not scoring in recent games after scoring nine goals in Boston:
That nine-goal game was something I have never witnessed as an LA King, not that it was a fluke or anything like that, but that night the bounces were just going our way and we were playing good hockey. For the most part we are going to win games 2-1, 3-2 and we are happy with that. We would like to be the highest scoring team in the NHL, but we realize that it might not go that way. We take a lot of pride in playing good defensive hockey and creating our chances that way, but still, when it comes down to it, we have to put pucks in the net.

Doughty, on turning the scoring around:
There is always some little things that need to change and tweak, and the coaches will address all that tomorrow. It just comes down to bearing down and putting pucks in the net, getting more bodies in front and banging in dirty goals, we don’t have to score the pretty goals all the time, just little garbage goals around the net.

Doughty, on his defensive play that led to Anze Kopitar’s goal:
They were looking for Ovechkin every single second of that power-play. I just tried to bait him into making that pass, make him think he had it and took it away right after I saw him look that way. I was happy I made that play, and happy we scored on it, but we didn’t win, so I am not a happy man after that game.

Doughty, on facing Justin Williams and Mike Richards:
It was weird, looking over there. Rick always stretches in the same spot, he used to stretch next to me. I looked over and smiled at him. It’s weird playing against them, but we understand they are not a part of our team anymore. We will always have those memories with them that we will never forget, but now they are on the opposite side and next time we play them we have to beat them.

Jake Muzzin, on the loss:
If we play like that, we are going to win a lot of hockey games. We created a lot of opportunities, it’s just a matter of putting one or two in the net. We had a lot of grade-a looks, but we couldn’t capitalize. This is a high-powered team that is going to score one, maybe two, and you are going to have to score that too, so we came up just a little bit short.

Muzzin, on containing Washington’s offense:
We did a pretty good job through the first two periods. They had some chances in the third. We did a lot of good things, it’s just a matter of putting one or two in the net.

Muzzin, on whether the game felt like a playoff game:
Oh yeah, that’s the way we looked at it. They have their season almost wrapped up, but we are clawing here. I guess we were the underdog going in, trying to knock off the top guys. Like I said before, if we continue to play like that we are going to win a lot of games. We will work on some scoring tomorrow.

Muzzin, on Quick’s performance:
He was awesome, made some big saves. We needed to put one more in for him.

Muzzin, on the road trip:
We need to capitalize on our opportunities. We have done a lot of good things, maybe we just scored too many goals in Boston, now we are coming up a bit short. We just have to capitalize on some chances.

Muzzin, on the Capitals:
They are a good team. They have Ovechkin, Backstrom, Oshie and a lot of high-end skilled guys that move the puck well, stretch you out, good passes, and they are a good team. I like to think we are too, and it was a good game tonight.