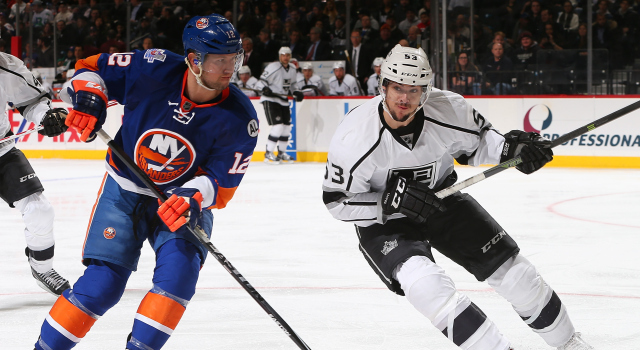 Defenseman Kevin Gravel made his NHL debut on Thursday night with the Los Angeles Kings in a 5-2 loss to the New York Islanders. Wearing No. 53 and paired mostly with Alec Martinez, Gravel finished with 10:46 of TOI (all even strength), no SOG, one block and two giveaways.

The 6-foot-4 blue liner out of St. Cloud State was officially recalled by the Kings right before the game after Christian Ehrhoff cleared waivers and was assigned to Ontario. In 42 games with Ontario, Gravel has five goals and 11 assists.

Quotes below via LA Kings Insider, Jon Rosen, who also gave his assessment of Gravel’s performance in today’s edition of “Waking up with the Kings.”

Kevin Gravel, on if he was prepared to be thrown into Thursday night’s lineup:
I think so, I mean you get a little bit of time to think about it on that cross-country flight, that’s not a trip you mind making. But yeah, I think anytime you just get thrown right kind of into it, you don’t have time to really think, trial by fire a little bit, trial by error. It’s good, obviously it’s exciting, you’ve been working your whole life for this and you get the first one, it’s an exciting moment.

Gravel, on what his thoughts were during his first shift:
Yeah, you try to kind of turn that off, you know once the puck drops its time to play, you just tell yourself it’s a hockey game. I’ve played 40 of them this year already, albeit in the American league, but you know, it’s still hockey and that’s kind of what you try to tell yourself and you go through it with that.