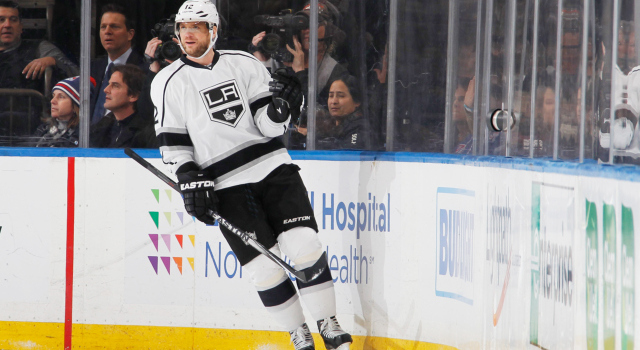 After scoring a first period power play goal, Marian Gaborik suffered what was described by a team spokesman as a “lower-body injury” as the result of an awkward collision with New York Rangers center Dominic Moore and did not return. It didn’t look good:

After Gaborik hobbled to the bench, he was assisted off the ice and towards the dressing room.

Well just what you saw on tv w/ Gaborik is what I saw down by locker-room. No weight on knee. Dr.'s in there w/ him now. In pain.

Gaborik, who turns 34 on Sunday, has not missed a game this season and appeared in his 99th consecutive game on Friday. He has 12 goals and 22 points in 54 games this year.

The Kings rotated their left wings throughout the lineup with Gaborik out, and it was Tanner Pearson who scored the overtime game-winner with 1:50 remaining in a 5-4 win.

There is no word yet on the severity of the injury, but updates will be shared on LA Kings Insider following further evaluation over the coming days.