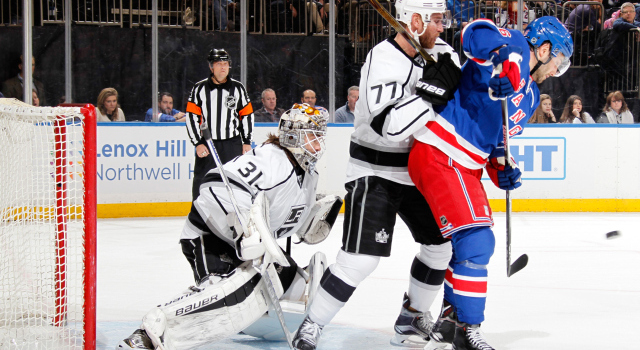 ANZE KOPITAR
On his performance:
We got the start that we wanted. Then a bit of a letdown, I don’t think they had the start that they wanted. They came right back pretty strong and we realize they have good players that can make skillful plays and that’s what ended up happening. Bottom line for us we grinded it out and got the two points.

On his last hat trick:
I think the last one was in Columbus, so yeah I remember it a little bit, but it feels good now.

On his line’s performance:
Getting a goal on the first shift of the game definitely helps. I thought we were strong on the puck overall. Last night we were just turning pucks over in the wrong spots on the ice and it ended up costing us. Then we had to defend and nobody wants to do that and you’re losing energy, and tonight I thought we took care of the puck really well and played in the offensive zone most of the night.

On responding to Gaborik’s injury:
The bench shortens obviously, so it was just a lot of mixing and matching going on. You have to make sure you are on your toes and when you are on the ice you give it your all.

On the game-tying goal :
Your trying to win the faceoff back, and the designed play was me rolling over the top and after that the instinct kicks in and either you have to pass, you make a play to the net, and I figured the fairly smart move was to throw it to the front of the net and it worked out for me.

On Budaj’s play:
Well he gave us a chance and that’s really all you really want from your goaltender. He gave us a chance, made some solid stops, and we have confidence in him to that he is going to make the save that we need. With every goalie, we need to make sure we are there to clear the traffic out or some of the loose pucks, and he did that for us and he was great.

TANNER PEARSON
On the overtime winner:
It’s always nice, especially how the game went. Our leaders led the game today for sure. I was going to shoot the whole way there, I didn’t want to mess up a 2-on-1 pass and it go the other way on another 2-on-1, so I was glad it went in.

On the start to the game:
We wanted to focus on our start today, and that’s a good way to start the game is scoring 33 second in. Unfortunately we let our foot off the gas pedal and they were able to capitalize, but Kope was able to get another big one at the end of the game.

PETER BUDAJ
On playing in the NHL again:
I’m glad I was able to get this chance and I am very happy. Especially playing in Madison Square Garden, it’s just amazing against a very good team. We had a solid game, our guys worked really hard, we never quit. The Rangers are very good, especially at home. They made some nice plays and when you let in four goals it doesn’t look that great, but credit to the guys they never quit in front of me, they did everything they could. After they scored with four minutes left in the game, we kept battling and got the tying goal and then the winning goal. It’s great credit to the team that we stuck together through adversity and it was a great team win.

On Derick Brassard’s overtime chance:
I should have probably played the puck. If I could replay the play I would probably get out there and play it. I actually thought it was Kreider for some reason, I didn’t know it was Brassard, I thought it was Kreider and he’s pretty fast. When I didn’t go right away I didn’t want to go because I was already too late. I was able to make the save and the guys battle it out for me and I am very thankful. It’s a great feeling to be back and to get a win for our team.

On last season’s struggles:
My whole mindset is different this year. Last year I was focusing on coming back to the NHL and that took the focus off of my game and off of stopping the puck. I kept working hard as I always do, but last year my focus was on the wrong things. If you are going to come back to the NHL that is not up to you, it is up to the coaching staff and the organization if they are going to give you a shot. You have to show them on the ice that you can play. This year, I tried to change my focus to just playing and helping the team to win games.

On if he had any nerves:
It was very nice to come back, I wasn’t stressed out or anything, it was kind of like excitement. It was very exciting, Friday night, Madison Square Garden, LA Kings vs. Rangers, it doesn’t get any better than that.

On adjusting to NHL speed:
I felt good. I think even though the game is a little different here as opposed to the minors, no offence to the guys in the minors, but I think the guys in the minors still have a great shot and as good of shots as the guys here, but the plays happen a little bit quicker and a little bit more tape-to-tape. It’s a little adjustment that I will keep working on, and we will see what happens. It was a little bit of an adjustment but I was able to see the puck in OT and make the saves, so I was happy I could make the save. As I said before, the guys battled so hard for me and it’s a credit to them. We were down with 4 minutes left in Madison Square Garden and to come back, it’s a huge team win for us.

On playing with an early lead:
It does settle you down a little bit, but I have heard this saying from soccer, when the goal happens to early you start thinking more about the result than the process. That’s something you can get caught up into. You focus on the next puck and when we get a two-goal lead it helps, but you have to focus on the next puck.