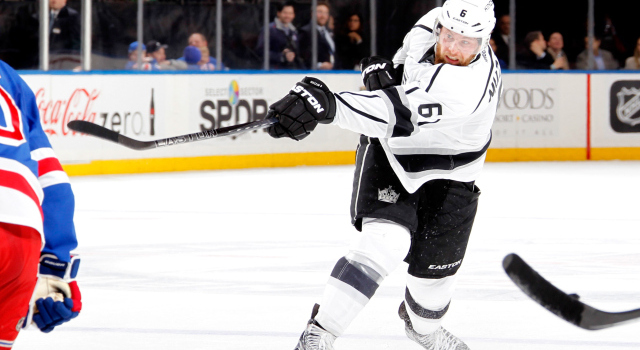 On whether he was happy with the effort:
I mean, we’re into the third game of the trip, and quite honest, I thought we played better last night than we did the night in Boston. Tonight, we got rewarded a little bit for the whole thing

On Peter Budaj:
I thought he got better as he went along and obviously made a couple big saves, especially in overtime. There were a couple two-on-ones in the third, also.

On Anze Kopitar:
It was Kopi’s best game of the season, that’s for sure. Not just because he scored three goals, but it was his best game all around in terms of using his whole package. I mean, he was a pretty dominant player.

On whether he’s confident in three-on-three overtime:
I thought we’ve had good luck three-on-three. I think our record is right there, and it’s probably [inaudible] playoff spot right now.

On having success in back-to-back sets:
Everybody gets, what is it, 10-to-16? It’s another area that we tried to get better at this year, to try to be really strong in the second parts of those games. If you lose the first one, you sure as hell better be putting it all in to win the second one.

On whether he has an update on Marian Gaborik:
No. You saw what I did.