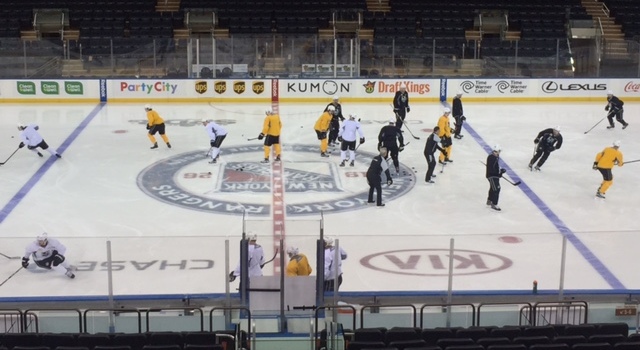 Good afternoon from the team hotel. I’ve run out of greetings that lead off the morning skate updates, so let’s just get to tonight’s projected lineup. Today’s rushes indicated the following:

-As noted, Jonathan Quick did not skate this morning. He remains day to day and is still with the team on the East Coast. Had he suffered an injury that was anything beyond “day-to-day,” he would’ve returned home. Peter Budaj will make his Kings debut after tearing up the American Hockey League.

-If you’re looking for analysis of Budaj’s play or Kevin Gravel’s reflections of his first NHL game, those links are just waiting to be clicked on. As noted above, Gravel is expected to remain in the lineup against the Rangers. Tanner Pearson and Nick Shore are also expected to draw back in after sitting out a pair of games.

Darryl Sutter, on the team’s success on the second night of back-to-back sets:
We’ve done a good job of that so far this season. Back-to-backs, you see that schedule when it comes out, and it’s an area that we wanted to necessarily have a better record at this year but have better performances at, so we’ve done that.

Sutter, on what he likes most about Madison Square Garden:
Original six. Matters to some of us old hockey guys that are in here. [Reporter: You have a special memory of playing here, any particular game that stays with you?] I remember being here as a player. It was always exciting and fun, and then obviously as a coach, we played in the finals here. Seen it through two or three different renos. It’s an awesome place.

Sutter, on Lecavalier’s performance after not having a big role in Philadelphia:
He didn’t have a role in Philly, to clarify. [Reporter: So what told you that he was ready for what you’re giving him?] He’s a Hall of Fame player, a well-trained player. We watched him practice – we were lucky to do that, play Philly twice and watch him practice. There was still that there, I think. He’s a proud guy.