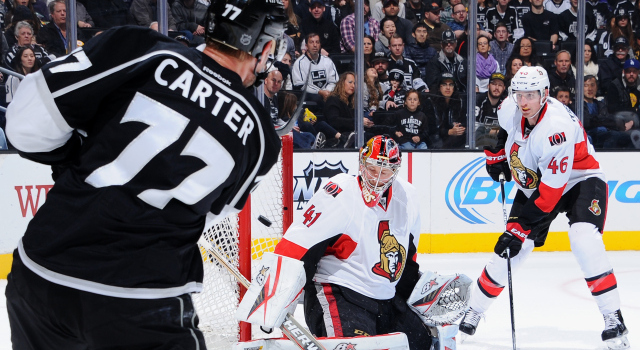 Dustin Brown:
On possible challenges of a new rink:
I don’t think it should be that different really, I mean the ice size is the same and that is all that really matters to us. There are a lot of, like you said, quirks and different things about this arena; what surrounds the rink and how it’s layed out. As played as long as it’s 200 feet long, you just get ready to play.

On feeling out the new arena in warm-up:
You check the boards, like how much they bounce, rim a couple pucks to see if there are any boards that stick out, Zamboni doors and you kind of get a feel for that in warm-ups.

On what he has heard about playing at the new arena:
I don’t really pay attention to that.

Jeff Carter:
On having the dads here:
It’s fun. I’ve done it a bunch now with Philly, Columbus and now here. This is my second one here actually. The guys enjoy having them around, and for the dads they get to see what we go through, so it’s cool for them. I know they all have a little bit of fun when we go to bed, so it works out for everybody. (reporter asked if they are in separate rooms) Nope, same rooms.

On playing in a new arena and testing everything out:
Yeah, it probably would have been nice to have a pre-game skate there this morning, but I mean every rink is different. Boards bounce differently, the setup is different, we will have to check it out a little bit in warm-ups. The boards are more for the defensemen more than the forwards with the pucks coming off. For me it doesn’t really change a lot.

On anything that stood out from the game against Boston:
We were just skating. We were back to everybody skating, everybody jumping on loose pucks. We have done that before. We got some good bounces on a few of the goals, but when everybody is moving as one, when we do that we are usually pretty successful.

On the effort to get Milan a goal in Boston:
We were up by a few, so we had the luxury of trying to be able to set him up. It was a big night for him, the crowd was feeling him. It was nice that Kopi could set him up there.

On the lap at the end of the game:
He was just standing there waving to everybody and Marty and I were standing there and just told him, go for it buddy. Why not? It was a good night for him.