Ehrhoff on waivers, Gravel on way up, Quick day-to-day 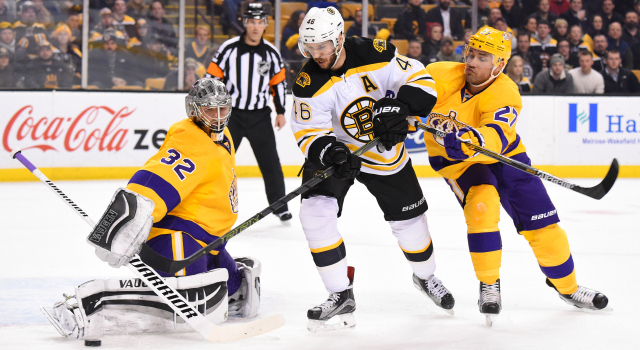 There’s lots of news coming from the Kings’ 11:00 a.m. practice at Agganis Arena on the Boston University campus. Before we cover this news in detail, here’s a Cliffs Notes version of what’s happening this morning.

-Jonathan Quick, in a preliminary evaluation, is “day-to-day,” according to a member of hockey operations. That was shared before today’s practice as Quick continued to be evaluated. It’s still early, and more should be known about the extent of the injury sustained when 6-foot-6 forward Jimmy Hayes slid into him with under 20 seconds remaining of last night’s 9-2 victory at TD Garden, I’ll share it. From an upstairs view, gauging the reaction of the Kings players on the ice, it appeared as though the team’s immediate sense was that there was nothing malicious about the collision, but of course, if I sense any different sentiment, I’ll share it.

-Christian Ehrhoff has been placed on waivers, according to Bob McKenzie. In 40 games this season, Ehrhoff has posted two goals, 10 points, 32 penalty minutes and a minus-10 rating in 40 games played. The veteran filled the role of a sixth (and sometimes seventh) defenseman, and while the offensive D-man filled a role on the power play and in generating up-ice puck movement, in discussions with those in hockey operations in both the middle of the season and in recent conversations, there were negative evaluations of the defender’s game. Ehrhoff isn’t expensive, and for a player with positive possession metrics, it wouldn’t be a surprise at all to see a team make a waiver claim on him.

-The move won’t be made official until Ehrhoff’s status is resolved – the Kings can only have 23 players on the active roster – but Dean Lombardi told me that Kevin Gravel will be called up, and another member of the hockey operations staff confirmed that the player should join the team in New York tomorrow. The Kings play the Islanders in Brooklyn on Thursday, the Rangers on Friday, and the Devils Sunday, so there is a chance that the former St. Cloud State Husky could make his debut this weekend. In 42 games this season, the 6-foot-4, 200 pound defender has five goals, 16 points and a plus-five rating. I’ll have more from the team’s development staff on Gravel later today.

-Lots more to come, as the dressing room is about to be opened to the media…