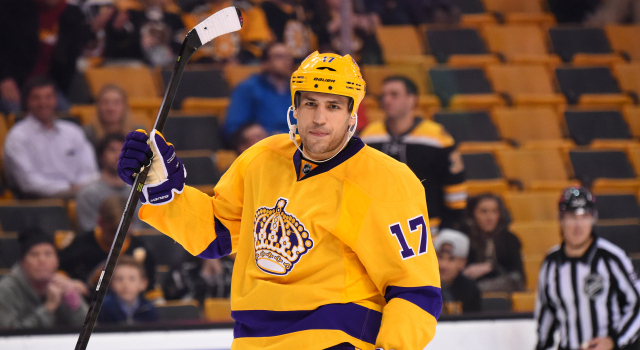 Sutter, on Milan Lucic’s return:
I think it was special and unique. He’s a Boston type player, so fans love him. He won a championship here. That type of player that fits in with the crowd is always well respected. It was probably the best one [the tribute] in-game that I have seen.

Milan Lucic, on opening the road trip with a win:
Probably better than we expected. For our team especially goals don’t come too easy, but I think today we were definitely committed to getting pucks on net, getting people at net. You see all our goals tonight, they weren’t really top corner shots or anything like that; dangling through three guys. It was just getting pucks on net and finding those rebounds and the team was committed to that all game long and I think that’s why it was going in for us tonight.

Lucic, on his emotions in returning to Boston:
You think about the reaction and the excitement from the crowd. The crowd was definitely great to me tonight, and I can’t appreciate the fan’s support enough, so thanks to them for making this a special night for me individually and thanks to my teammates for getting a big win for us starting off the road trip.

Lucic, on the tribute video:
It was pretty cool that I got to experience that. Like I talked about this morning, a lot of special things happened to me here in Boston. From the management to the coaches to all the teammates I had here over the last eight years, especially the fans, they really helped me become the player and the person that I have become today. To have that moment in that second TV timeout was really special and was definitely a pretty cool feeling.

Lucic, on his post-game victory lap:
I didn’t have it planned. A couple teammates told me to go out and do it. I just remember being back in Calgary when Iggy [Jarome Iginila] did it, so I felt like doing it. As much as I was looking forward to this game I am glad it is finally over, so I can stop thinking about it and just focus on the rest of the road trip.

Drew Doughty, on nine goals from nine players:
I don’t think I have ever been on the Kings when we have scored nine goals. It’s a first, we are happy about it. We are used to winning games by one goal, so we are not used to that.

Doughty, on a close game early:
They still had some good chances and Quickie [Jonathan Quick] had to make some big saves early, but eventually we just started getting the bounces and kind of just put them away and put them out of the game.

Doughty, on starting the road trip with a resounding win:
It’s huge, we haven’t been playing well lately. We came on this road trip ahead of time talking about how important this first game was and how important the road trip as a whole was. This is the right start, this is how we wanted it to happen and now it’s on to the Islanders.