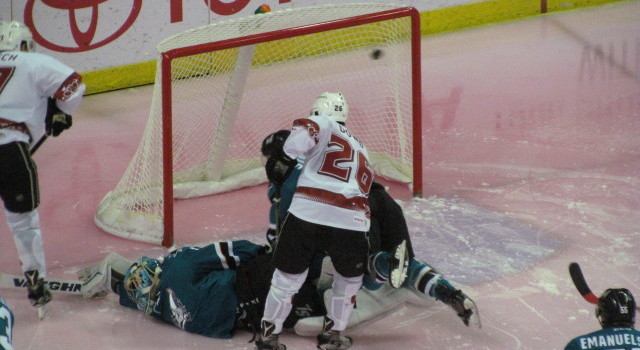 Reign game breakdown
The Reign scored three unanswered goals in the second period, including two just 16 seconds apart to rally for a 3-2 win against San Jose on Saturday night to complete the weekend sweep of the Barracuda (19-16-5-3). After falling behind 2-0 in the first period and seeing goalie Peter Budaj’s shutout streak snapped, the Reign answered with Michael Mersch’s team-leading 18th goal off a feed from Sean Backman 42 seconds into the second period. Then came the flurry with Jonny Brodzinski finishing a backhanded pass from Kris Newbury on a 2-on-1 to make it 2-2 and Justin Auger getting to the dirty area to hit home Derek Forbort rebound seconds later. Jordan Samuels-Thomas assisted on both the tying and Auger’s go-ahead goal. In the third period the Reign closed out the game late with San Jose goalie Troy Grosenick pulled for the last 1:46. With the win, the Reign (28-10-3-1) improved to 7-1-0-0 against the Sharks affiliate this season. Budaj’s 26 saves earned him his 26th victory while Grosenick made 21 saves in defeat.

Best quote
Auger, on the Reign coming back to win: “It’s every game. We’re relentless. We’re never going to give up. We were down two after the first period and we’ve come back plenty of times this year. We know we can do it and we have confidence in one another and we pick each other up and once we get one it seems like they just start flowing.”

Three stars
–Jonny Brodzinski – Skating with Adrian Kempe and Kris Newbury has allowed the rookie out of St. Cloud State to showcase his speed and give him a little consistency these last two games after a bit of line-hopping. Brodzinski’s goal, his first since Jan. 8, was a goal scorer’s goal and one that was more along the lines of what Reign head coach Mike Stothers has said we should expect from the Minnesota native. Credit does go to Newbury for his backhanded saucer pass that got to Brodzinski on the 2-on-1 rush, but Brodzinski’s finish was just as nice, roofing the puck past Grosenick for his sixth of the season.
–Michael Mersch – When the Reign need a goal, the player Stothers affectionately calls “Big Mike” comes through. Ontario threw 13 shots on Grosenick in the opening period but couldn’t break through, but they did just 42 seconds into the second on Mersch’s goal off a rush and a feed from Sean Backman. Backman delayed long enough in the high slot to draw defenders to him before dishing to Mersch hauling up the left wing. “It was huge right way to just kind of get everyones’ emotions back into it,” Brodzinski said of Mersch’s goal. Mersch now has goals in four straight games (six points total), all four straight Reign wins dating back to Jan. 29.
–Justin Auger – The 6-foot-7 forward, like Brodzinski, also broke a scoring slump dating back to Jan. 5 with a goal that was more characteristic of his style of play as well. Crashing the net was Auger along with his linemates Samuels-Thomas and Andrew Crescenzi in what stood as the game-winner and capped the Reign’s furious rally. “I believe Forbs shot it from the point and the puck was just bouncing around there and I know JST got a whack at it, I got a whack at it and we were just swinging for it and hopefully putting it past the goalie,” said Auger.

Turning point
The Reign’s two goals 16 seconds apart in the second period marked the huge swing in momentum, but it started with a pad save by Budaj on a quality opportunity for Trevor Parkes in the high slot. Budaj’s save turned into the 2-on-1 that resulted in Brodzinski’s fine finish, which then of course led to Auger’s go-ahead goal.

This and that off-ice
For the second straight night the Reign wore special jerseys, this time them being of the white and red Valentine’s-themed variety to benefit Loma Linda University Children’s Hospital. The game-worn jerseys were auctioned off after the game. … Rookie forward Valentin Zykov was scratched for a second straight game. … The Reign again kept San Jose coach Roy Sommer from AHL career win No. 637, which would give him sole possession over the record currently shared with Fred “Bun” Cook.

Next up
Stothers called this a mini-playoff on Friday night between the Reign and the Barracuda and the three-game series will conclude on Wednesday in San Jose at 7:30 p.m.