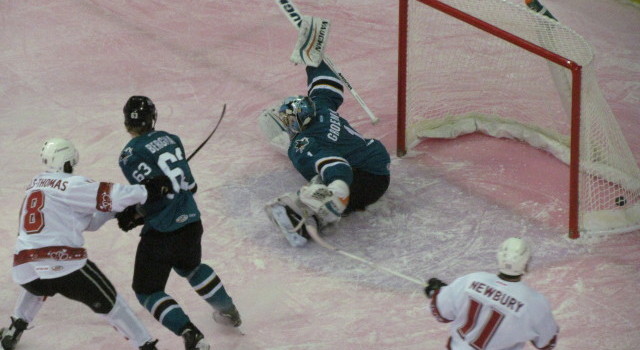 Reign head coach Mike Stothers, on the weekend wins and coming back tonight:
Got to be happy with the wins. Thought we had a tough start tonight. Thought we looked a little sluggish at the start. We got it rectified after the first I think. Started skating the way we can. Again, credit to the guys. We don’t get discouraged. We got down one, we get down two, it’s not that big a deal. Still 40 minutes to play and that was the mindset going forward. Although really don’t want to keep making a habit of that or do that too often, but we got better as the game went on.

Stothers, on the leadership group and not giving up after down two:
It’s something that we started last year and those that carry over for us this year, they bring that same attitude. It’s all about attitude. You can tell yourself you’re tired, probably not as tired as you think. You can say you’re not playing very well, you’re not as good. But you’re not as bad as you think, it’s just a matter of persevering. We’ve done it before so we know we can do it again.

Stothers, on Brodzinski and Auger scoring for first time since early January:
Well, well, well. Yes. It had been quite some time. It was very nice to see. I think both individuals have been playing well. Maybe they’re streaky, I don’t know. But tonight they got goals when we needed them. I wasn’t even quite sure who got that goal with JST and Cres and Augey. It didn’t really matter, it went in. It was good to see. That was a big, heavy line. Brodz, nice pass from Newbs, puck-ready, didn’t waste any time getting it away. Again, we’ve talked about it collectively. We need contributions from everybody so can’t just rely on one or two guys each and every night. So, it was big. I’m sure it was big for them. They’ll feel good about it. Good for us.

Stothers, on how nicely he spoke to the players between the first and second:
Wait a minute I’ve gotta see, have you talked to any of them yet? Sometimes things come out of my mouth and I’m not sure what I’ve said until afterwards and then people say did you really say that? And I go, apparently. So, I thought for me I was very nice. How you guys may be able to read body language differently than me but we just talked about the things that we weren’t doing and what we needed to do. And there was still plenty of time to do it in. That’s my story and if you get someone else’s version you can run with their version if you want.

Stothers, on Brodzinski’s development:
First of all, he’s a guy that you can play in a lot of different lines. He’s not pigeon-holed into one line or one category. I think he does a lot of things well. Although he got off to a slow start before he scored his first one, I still think in that individual is a goal scorer. Just because of the way he can shoot a puck, his release, his nose for the net. And I think that’s going to come in time. Consistency is probably one of the things you deal with with a lot of young players. Maybe the fact that I do move him around quite a bit from line to line, as a young player you look at it like, ‘oh geez, I’m not here, I’m there and everywhere else.’ Whereas maybe if he had a little more experience he’d go, ‘geez, coach is trusting me in this situation, or coach wants me to play with these guys tonight.’ That to me, that’s just my experience because I’m older than him, quite a bit older than him. I’m looking at it as this guy’s pretty valuable. We can play him in a lot of places. He’s been very good. I just think it’s a matter of experience and him getting some minutes and getting some touches. Can he be a little bit better in the defensive zone? Sure. Can he have a better finish in the offensive zone? Sure. But I think you noticed late in the game I was using him and Kempe on either side of Newbury late in the game, so there’s some trust building. [Reporter: Where has he grown most from training camp to now?] Certainly not in height. He’s just become a pretty reliable player. Usually when a coach is using the word trust and you’re using him in situations that means huge growth. I think there’s a lot of potential there. I’m a real big fan of his.

Stothers, on the defensive effort tonight and Friday:
It’s still a little nerve-wracking. We had to do it, that’s part of it. You’ve got to find a way to finish it out and we did. Again, we’ve got some guys that have a lot of experience in those situations and we’ve got guys that we kind of testing the waters. So, better to do it now in the regular season then hopefully when the playoffs come and there is no … it’s sudden death and it’s over. Let’s make sure we’re getting it right now.

Stothers, on the last minute with the San Jose goalie pulled:
The heart rate accelerates a little bit. It’s strange because some nights as a coach you just get a feeling and you’re not really, I mean you know there’s the potential there because you’ve got the extra attacker, but you just have a feeling about your team. I’ve had that the last couple of nights about our guys. Number one, Budes is pretty good in net and we’ve got some really good, reliable leaders on our team. The sacrifices that we’ve seen from the start of the season till now, whether it’s a blocked shot or making an extra effort to make sure pucks get out of the zone or do the right things. Guys aren’t leaving the zone. I think when you see us play with the goalie out there’s nobody cheating. There’s nobody that’s looking for that empty-net goal and if they were they wouldn’t be out there. And if they were, they wouldn’t be on this team.

Stothers, on Zykov being scratched back-to-back nights for Lowry:
I’ve liked Lows’ game. I thought the last time we were in San Jose, Lowry had a really, really strong game for us. And then we went and played San Jose last night here and we had a good game, a win, and didn’t really want to change anything. Basically a numbers game and come Wednesday, who knows, could be Brodzinski out. Just to keep you guys on your toes.

Justin Auger, on scoring for the first time since early January:
It’s been a while. Felt good to put one across the line. I’ve just been focusing on shooting as much as I can and taking it to the net and sometimes you get in those little slumps and it feels good to kick it off and I’m just going to keep shooting and hopefully they keep coming. [Reporter: What happened on that goal?] Playing with Cres and JST, three big guys, we’re looking to take the puck to the net as much as we can. I believe Forbs shot it from the point and the puck was just bouncing around there and I know JST got a whack at it, I got a whack at it and we were just swinging for it and hopefully putting it past the goalie. He was solid tonight and we were happy to get one past him.

Auger, on coming back again and winning another tight game vs. San Jose:
It’s every game. We’re relentless. We’re never going to give up. We were down two after the first period and we’ve come back plenty of times this year. We know we can do it and we have confidence in one another and we pick each other up and once we get one it seems like they just start flowing.

Jonny Brodzinski, on his goal:
Puck got chipped up the wall. It was about head-high and Jordan Samuels-Thomas batted it down out of the air, kicked it over to the middle. Just a 2-on-1 break with me and Newbury. Great, great pass by him. Backhand saucer pass. I think it was over two, Jordan was coming up the ice too along with a defender, so it was over the D-man’s stick, both of their sticks and right onto my tape. I’d say it’s about 95 percent of that pass. [Reporter: Were you expecting him to pass?] He’s a passer, so I was just expecting to get that puck the entire way down so I just stayed open the entire way until he feathered it over to me.

Brodzinski, on breaking his scoring slump:
There’s been so many chances in these last couple games where I could have put the puck in the back of the net. … Finally this one can go in instead of going bar out.

Brodzinski, on playing with Newbury and Kempe:
It’s awesome. They both see the ice extremely well. Kempe’s got the speed. It’s almost sometimes where you just get the puck chipped up in the neutral zone and it’s a 2-on-1 with me and one of the other guys. They’re a fun two guys to play with for sure.

Brodzinski, on coming back down 2-0:
It happened so early, too. And we’ve came back on a few teams this year. It’s kind of something, we’ve probably done it about five or six times where we came from behind this year. Just get those out of the way and keep going.

Brodzinski, on the message between the first and second periods:
It wasn’t great. We didn’t play a very good first period but we definitely came out in the second obviously with that Mersch goal. It was huge right way to just kind of get everyones’ emotions back into it.

Sean Backman, on why he left the game in the third period:
Just got hit in the back of the head with a puck there (Dowd clearing attempt). No biggie. [Reporter: Was it concussion protocol that you had to come out?] No, I had to get stitches. Head’s fine. Just stitched me up. I’ll be ready to go.