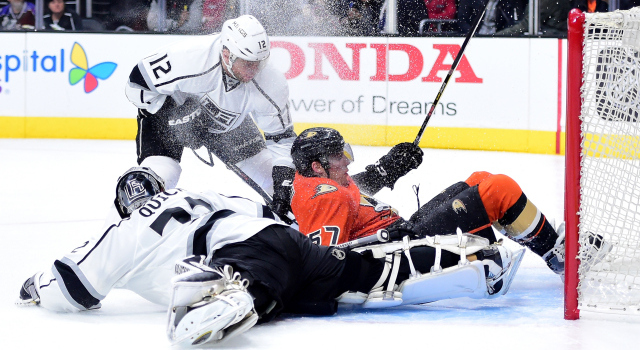 Thursday’s 4-2 loss offered very little to appreciate from the perspective of Kings fans as the visiting Anaheim Ducks, clad in highway worker-hued jerseys, opened up a 2-0 first period lead, used a 15-4 shot advantage in the second period to chase Jonathan Quick, and held on for a comfortable 4-2 win that signified the gains and momentum in their own game while illuminating several shaky individual performances by the home team. Los Angeles endured an abysmal start marked by mistake-prone and flat-footed hockey. For as impressive as Vincent Lecavalier has been in his Kings tenure, especially in helping to spur a clicking-on-all-cylinders power play, his turnover on the opening goal was a gaffe representative of the first two periods as a whole when he lost the puck to Ryan Getzlaf and was then beaten down the ice in the development of a two-on-one rush. Four minutes and 20 seconds later, Tanner Pearson received a perfectly acceptable Brayden McNabb advancement up the left wing and made one extra stickhandle with the puck, allowing Josh Manson to free it loose back up to Getzlaf, setting up David Perron’s net-crashing and falling redirect. Anaheim nearly made it 3-0 late in the first period during one of their several threatening power plays.

Some will disagree, and feel free to start off your own debate here, but I have no problem with Milan Lucic taking an extra minor to stick up for Anze Kopitar, even if the Hampus Lindholm hit was clean. Obviously, it’s preferred if Lucic doesn’t take four minor penalties in a game. But no one wants to see the Kings’ best player hit like that, and Lucic is capable of playing an effective, emotional game, and sticking up for his center is part of that emotional investment. This may not be a popular opinion.

The Kings’ game wasn’t there for them last night, and a look back at the last two or three weeks is a reflection of a team that has banked on an exceptional power play while other aspects of their game haven’t hit a seasonal high point. Jonathan Quick has come back down to earth a bit, though keep in mind team save percentage – which reached .924 prior to the most recent Ottawa game and now sits at a plenty respectable .918 – is a reflection of both the goalies’ play as well as a state of the team’s play in front of the crease. And credit should be given to the Ducks, who’ve been buoyed by an upward and expected trajectory as their shooting percentage has inevitably risen as they’ve continued to rely on a tight game in front of quality goaltending. Questions can be raised about Anaheim’s constitution (though, to be fair, their assets and cap space suggest they could be a different team in subsequent meetings), but there’s good balance and strong structure in place that keeps scores low and makes life difficult (and full of ice bags) for opponents. On Thursday, Los Angeles didn’t have enough battle or mistake-free play to overcome that. 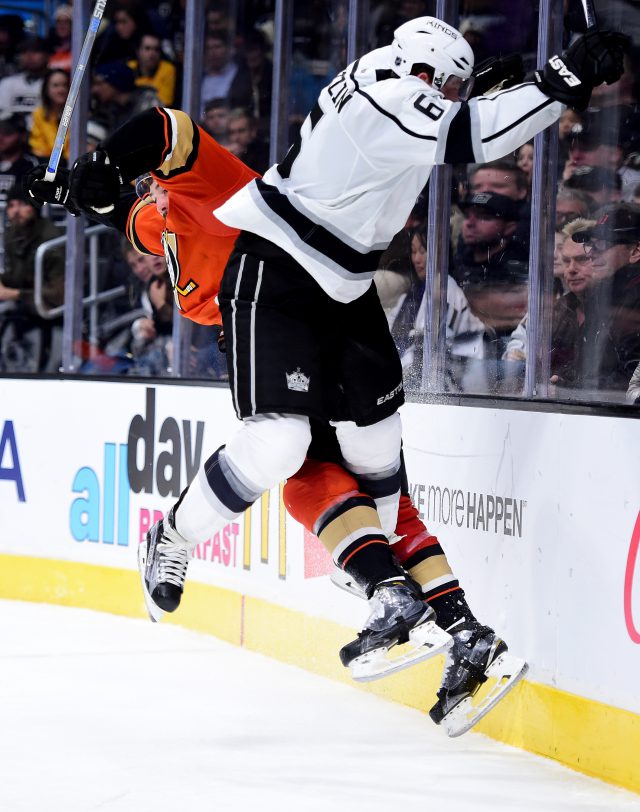