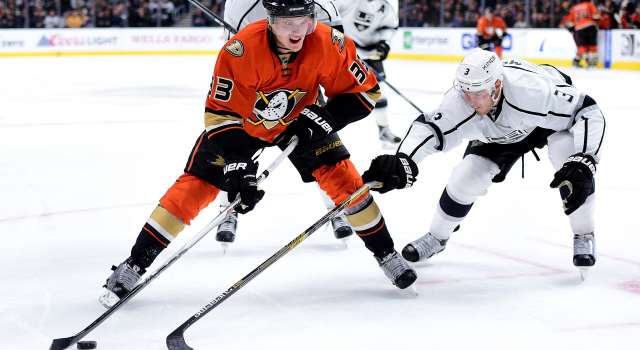 On whether he felt the Kings were ready to play when they took the ice:
Yep. I think their centermen dominated our centermen. I think we were ready, but not quite ready for that.

On pulling Jonathan Quick in the middle of a period:
Once in a while you pull your goalie. I believe there’s like, how many games in the NHL? 80 times 24, a hundred. I bet that there’s a chance a goalie gets pulled once in a while. Even the Anaheim Ducks pull their goalie once in a while. [Reporter: But was it more of a case of the way the team was playing in front of him than anything else?] Maybe.

On whether Anaheim is a different team with David Perron:
That [last game] was his first game, I believe. They’re a good hockey club. They were the team to beat, just asked most people in this room. They were supposed to win the Stanley Cup, they were supposed to win the division. We’ve got to look at it like we’re in a series, we’re one-one with ‘em. Quite honest, this game’s the same as the one in Anaheim last week or whatever it was. It was three-one at one point. That’s it. Two teams that normally don’t give up much.