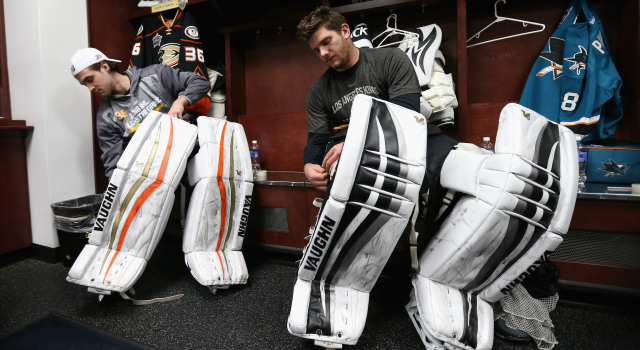 The United States’ 2013 World Junior Championships gold medal-winning team featured an array of names now plying their trade in the National Hockey League. Seth Jones, Jacob Trouba, Johnny Gaudreau and Shayne Gostisbehere were all players who claimed the title with a 3-1 win over Sweden.

John Gibson, who backstopped the United States to its third WJC gold medal, was named the tournament’s Most Valuable Player. The Anaheim goalie, who has seen his platoon role widen into a more steady starting job this season, enters tonight’s game with a record of 11-7-2, a 1.91 goals-against average and a .923 save percentage.

Along with Jonathan Quick, Gibson helped back the Pacific Division to a 2016 NHL All-Star Game title during a weekend in which the two rivals who manned opposite creases in the 2014 playoffs shared a similar goal as teammates for one weekend.

“I think that’s what’s good about events like that, you get the chance to meet guys you play against, there’s a few guys you already know from like Team USA events or previous All-Star games and things like that, but yeah, you get to meet the guys and talk with them,” Quick said. “Obviously all year long you’re usually battling with them, you know you might get into some battles one-on-one, but then you know, when you’re wearing the same jersey and you’re having fun, you kind of put all of that aside.”

And that came naturally for the two American goalies.

“Like him and everyone else, you don’t really see anything that you didn’t already know about the guys,” Quick said. “Everyone’s there for a reason, they’re all very good players, especially him. He’s a little bit younger, so we haven’t been able to see him as much as some of the older guys, but you know, we saw it a few years ago in the playoffs and last year playing against him. This year, he’s a great goalie, he’s young, really talented, and especially talking with him this past weekend, he’s got a really good head on his shoulders, so I think he’ll be around for a long time, and you know, he’s going to have some success, for sure.”

Darryl Sutter, who coached the Pacific Division team and got to know Gibson a little bit better while in Nashville for the All-Star Game, knows that the 22-year-old is part of an effective tandem with Frederik Andersen, who has appeared in 25 games but only nine since Thanksgiving.

“They have good goaltending, that’s for sure,” said Sutter, who also deemed Gibson the “odds-on favorite” to start for the U-23 team at this summer’s World Cup of Hockey.

Only the Ducks scratches pretty much hit the ice here at Staples. Freddie was still out with them so would figure it's John Gibson tonight.

On any involvement in discussing potential modifications to goaltender equipment:
No, I did not make it to that meeting. I did meet up with Kay Whitmore and we discussed some things regarding the equipment. I caught word that some of the gear was there, I didn’t see it, but I know he’s doing everything he can to make everybody happy because you’ve got guys on both ends of the spectrum, so he’s trying to make everybody happy and everything fair and I think he’s doing a great job with that. You know, him and Corey Schneider, who is, as far as the players go and goalies go, he’s doing the most, you know working at it the most, so I think they’re both doing great.

On his biggest takeaway from the whole weekend:
I just think it was great for the league the way everything worked out, you know I think there was a lot of stuff going on beforehand, and I think the way that it ended up working out was the best for the league and the players, and I think you know, at the end of the day it was just fun, guys had a great time, it was in a great city, fans in Nashville really kind of embraced it and got behind a lot of the players. I know they booed a few of the rivals, but it really was a lot of fun.

On what John Scott was like as a teammate:
He’s awesome. I know I’ve played with a few guys that were his teammates at some point, and you know everyone’s kind of had the same opinion about him just being a great team player and doing his job, just all around a professional, and that’s the exact opinion I got when I was able to spend some time with him. I couldn’t be happier for him, it seems like he had the best weekend of his career, right? He was enjoying it, he had his family there, friends, and that’s what the All-Star game’s all about, trying to enjoy it with family and friends, so I think he was really able to enjoy it.

On whether he was happy with the three-on-three format:
Yeah, I think it was fun. I think that last game, you see the teams really start playing defense and checking a little bit, it was a lot more competitive than an All-Star game typically is.