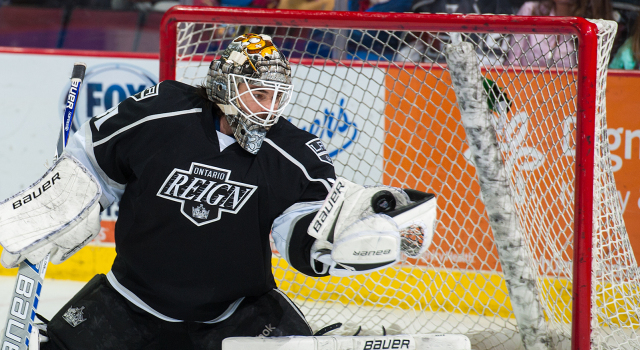 Reign game breakdown
The Reign cruised into the AHL All-Star break, dominating the league’s second-worst team in the Manitoba Moose (11-25-3-4) by a 4-0 score on Saturday night in Ontario. Michael Mersch had two goals, his team-leading 15th and 16th (ENG), and an assist as the Reign (26-10-3-1) won back-to-back games by way of a Peter Budaj shutout after a 2-0 win in San Diego on Friday. Kris Newbury’s first goal since return from injury held as the game-winner and All-Star Sean Backman had a goal and two assists to round out the scoring. The game was the last of an expected two-game conditioning stint for Kings forward Kyle Clifford who finished with 3 SOG on Saturday and a near-goal. At the 4:43 mark of the third, a shot by Clifford rang off the post and then was buried by defenseman Vincent LoVerde. The ref of the ice told Reign coaches he thought Clifford’s initial shot went in and blew the play over. As a result, no goal was ruled on LoVerde’s shot much to the dislike of the 9,491 fans at Citizen Business Bank Arena.

Best quote
Clifford, on how the Reign are like the Kings: “It’s funny, it’s kind of like our locker room. The team’s real close and the guys have a lot of respect for one another and they respect what each other does and it just seems like everybody’s got a role and everybody’s got a fit.”

Three stars
–Michael Mersch – Mersch, initially awarded as an AHL All-Star, won’t be participating due to rosters being due while he was still called up with the Kings. Instead, he’ll head off to Chicago to rest and spend time with his girlfriend. Although not going to Syracuse, the time off will be well-deserved. Mersch’s goal 6:33 into the second period put the Reign up 2-0, he set up Backman’s goal minutes later and then added an empty-netter for good measure with 46 seconds to go in the game. Since returning to Ontario, the dependable left winger has been a point-per-game player with four goals and six assists in nine games.
–Sean Backman – A goal and two assists, and nearly two goals and one assist, for the Reign All-Star. Mersch’s first goal was originally ruled to Backman after a point shot by Derek Forbort was whacked at by both forwards. But no mistake was made on the ruling of Backman’s 11th goal of the season at 9:31 of the second after Mersch collected a Zach Leslie shot from the point and got it over to Backman, who buried the puck past an out-of-position Manitoba goalie Eric Comrie. The 5-foot-8 right winger also set up Newbury’s goal, feeding him from the right boards, giving Newbury time for a backhanded move that fooled Comrie five hole. Backman finished a game-high plus-4 and tied for a game-high 5 SOG in his third 3-point game of the season.
–Peter Budaj – The Reign All-Star heads into the break leading the league in every important goaltending category. His 7 shutouts are currently unreachable (three others tied with 4), his goals against average is an eye-popping 1.61 and his save percentage of .933 is tied at the AHL’s top with Penguins affiliate goaltender Matt Murray. On the weekend, the 33-year-old Budaj stopped all 40 shots he faced. Saturday night, he got his team through three penalty kills in the first period and went on to collect his, you guessed it, league-leading 24th victory.

Turning point
The second period as a whole was a display of dominance for the Reign as they toyed with the Moose, outshooting them and outscoring them 14-8 and 2-0 respectively. After a penalty-filled first period sucked any tempo the game had to offer, a 5-on-5 friendly middle frame allowed the Reign to control the Moose and then the game the rest of the way.

Stat fact
–14 – Shots in the first period (7 from each side) and the same number 14 being the number of PIM in a long first period.

This and that off-ice
Head coach Mike Stothers and the team’s All-Stars (Backman, Budaj and LoVerde) were not made available to the media after the game as they sped off to Syracuse, N.Y., for the festivities. The skills competition on Sunday will be televised locally on Prime Ticket at 5 p.m. and the All-Star Classic takes place on Monday at 4 p.m., also on Prime. … In other AHL news, San Jose head coach Roy Sommer’s team broke a 6-game losing streak in a 4-3 win over San Antonio, allowing the coach to finally tie the AHL’s wins record with 636.

Next up
The Reign head into All-Star break and won’t practice again until next Thursday. On Friday and Saturday of next week they’ll host the San Jose Barracuda at 7 p.m. and 6 p.m. respectively.