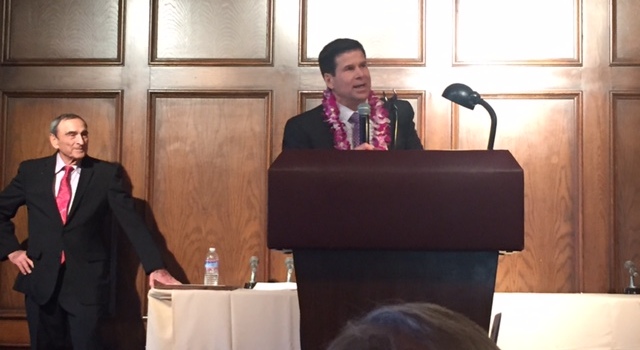 Jim Fox was inducted into the Southern California Sports Broadcasters Hall of Fame Monday afternoon at Lakeside Country Club in Toluca Lake in commemoration of his 26-year broadcasting career with the Los Angeles Kings, with whom he played 578 games from 1980-90.

An honor to work with @JimFox19, who today was inducted into the @socalsportscast Hall of Fame. Congrats, James! pic.twitter.com/Yp1ZpXHjiz

In addition to Fox, Rob Fukuzaki of ABC-7 and the late Joe McDonnell were also inducted into the SCSB Hall of Fame.

For those interested, I also wrote a story on Jim Fox for the program at this year’s SCSB luncheon:

Sharp, sophisticated, and always in good taste, yes, Jim Fox’s vintage Pinot Noirs are in many aspects a reflection of his illustrative and accountable commentary.

The Coniston, Ontario native was selected in the first round by the Kings in 1980 and knew no NHL other than the 578 games he played over a decade in Los Angeles and, after his playing career was cut short by a knee injury, in the off-ice marks left both in the broadcast booth as the team’s television color commentator and as the founder of the Kings Care Foundation and the co-founder of Patiné Cellars.

Though his transition from the rink to the broadcast booth wasn’t as commonplace 26 years ago as it is today, Fox has comfortably emerged as among the most trusted and informative analysts in hockey and graciously steps into the Southern California Sports Broadcasters Hall of Fame as an institutional voice of a team that celebrates its semicentennial in 2016.

“I trust his judgment first of all,” said columnist Tom Hoffarth of the Los Angeles Daily News, “because as a player, he knows what’s happening, and as a broadcaster who’s been doing this year after year now, 20-something plus years, I know he sees plays before they happen, and the more I watch the games, the more I feel like I’m on the same page with him as understanding the game and anticipating what’s coming up next, only because he taught me, as a viewer, what to expect, and who to look at, and what things to be observant about on the ice.”

In educating multiple generations of Kings fans on both the apparent and more nuanced aspects of hockey, he provides the appropriate balance of disseminating both unadulterated excitement and unbiased, accountable information with a recognizable and clearly articulated cadence. In doing so, he has developed a tangible chemistry with 2000 Foster Hewitt Memorial Award recipient and 2002 Southern California Sports Broadcasters Hall of Fame play-by-play broadcaster Bob Miller.

“He, in my opinion, is at his strength when he’s explaining layman’s terms, what went on during a certain play, not in coach speak with X’s and O’s and everything,” Miller said. “I’ve always felt if you’ve never watched a game, you could understand what he was telling you about a certain play, and I think that’s a real art to be able to do that.”

As funny as it sounds today, originally there was not an instant proficiency in his position as an analyst. Fox’s realization that his role, as a former player, was to provide the “why” – “why was that play happening?” “Why was that player there?” – and to articulate a game’s more technical and strategic moments helped to off-set an early portion of his television tenure in which he had yet to amass the repetitions that would ultimately smooth over his early self-doubt.

“It was about the 40th game of the season that first year, when all of a sudden one night – I kept thinking of this and I told him one night – I said, ‘Jim, I think you had fun tonight,’” Miller said. “He was good. It was the best that he’d done, because up until then, I felt, honestly, he’s going to say ‘that’s it, I’m done, I’m not going to do this,’ but he kept at it.”

The early challenges have long been replaced by a quarter century providing a beloved and trusted vocalization of the efforts of a team that has now reached a league zenith twice in the last four seasons. A constant over that time has been Fox’s tireless work and preparation – “He could probably do any other sport, too, just because of the homework that he does,” Hoffarth said – and emerging as among the most adept broadcasters in using the telestrator as a teaching tool to explain strategic aspects of the game that might otherwise be missed.

“Now he’s at that point where he makes it look easy,” Hoffarth said, “and people are coming up, seeking his advice on how do you do it, and he could probably lead them every step of the way and explain to them the highs and the lows, and when to trust your judgment and when to trust your instincts, not worry too much about how things are going, and just kind of grow into the job.”

With a broadcasting longevity that has stretched well into his third decade, Fox joins Miller and radio play by play broadcaster Nick Nickson, as well as reporters Stu Nahan and Rich Marotta as Kings voices to have been inducted into the Southern California Sports Broadcasters Hall of Fame.

Congratulations to Jim and Suzie Fox on the tremendous honor commemorating an exquisitely and intelligently crafted body of work.