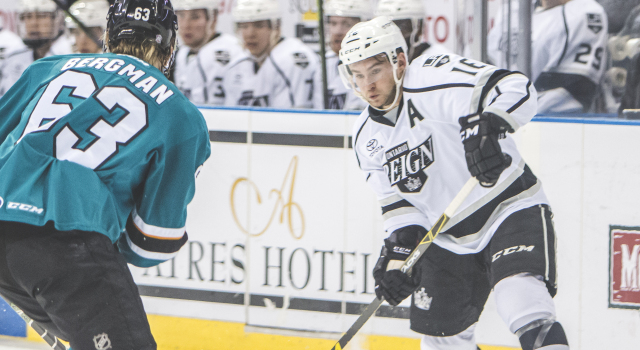 Reign game breakdown
The Reign (23-10-2-1) pulled off another dramatic comeback with a two-goal third period capped by an OT winner just 28 seconds into the extra frame from Nic Dowd to defeat visiting San Jose 3-2 on Friday night. After basically not showing up through two periods of play, the Reign needed the last 20 minutes to get going. Vincent LoVerde scored at 1:33 into the third to make it 2-1, feathering a wrist shot through traffic that beat Barracuda goalie Aaron Dell five hole. Then, on a power play and with goalie Peter Budaj pulled for even another extra attacker, the Reign tied it at 2 while skating 6-on-4 with just 1:32 left in regulation. Adrian Kempe held onto the puck from the right circle, eventually sending it through a sea of players to the stick of Sean Backman, who was planted at Dell’s right, for an easy one-timer into a virtually empty net. Dowd picked up his ninth goal on the winner, elected to hold the puck and shoot on a 2-on-1 with Michael Mersch, wristing a shot over Dell’s glove from the right circle. The Reign’s resolve was noteworthy, but their start was not. Just 38 seconds in, the game started with the Reign forced to kill a 5-minute boarding call to Kempe. After killing all but 7 seconds of the major penalty, San Jose (18-12-4-3) broke down the Ontario defense resulting in a Karl Stollery goal on a pass from Nikolay Goldobin that left Budaj with little chance at the 5:31 mark. Then, with 6 minutes left in the first, the Barracuda went up 2-0 when they got a jump on a faceoff in their own zone and rushed down ice, leaving defensemen Zach Leslie and Vincent LoVerde beat as Trevor Parkes tipped a pass from Jeremy Langlois by Budaj in the slot. Things got even worse for the Reign in the second, as they could not convert on a 5-on-3 opportunity for two minutes. Backman said afterwards that failing on that try took the wind out of the team’s sails a bit, but they knew they had 20 minutes left to win the game. When the Reign finally got to work in the third, they outshot the Barracuda 14-6 and prevented the opposition’s head coach, Roy Sommer, from picking up AHL career win No. 636, which would have tied a league record. On the back end the Reign’s constant in Budaj stopped 20 shots for his 21st victory.

Best quote
Head coach Mike Stothers, challenging Kempe to bring more in his game: “ … I still think there’s a lot more. So, he’s going to figure it out or he’s going to have a black cloud following him around every day and I’m the black cloud.”

Three stars
–Nic Dowd – The center now has points in his last five games and five goals in that stretch as well. He’s shooting more after being told to do so, “gentle reminders,” as Stothers likes to say. Gentle or not, the message has been heard loud and clear by Dowd, who credited linemates Michael Mersch and Backman with helping get the offensive side of his game to the next level. In overtime, zipping into the zone on the right side with the option to pass to Mersch, Dowd kept it for himself and beat Dell clean high glove.
–Adrian Kempe – Although Backman had the tying goal, the play was all Kempe. The Kings’ first-rounder picked apart the San Jose defense, waiting and eventually threading a pass through traffic on what would be considered a highlight reel play. It was redemption a bit for Kempe, whose early boarding major resulted in his team falling behind at the start. He hit a post on the 5-on-3 in the second period and said afterwards; “I should have got one or two goals tonight.” His assist to Backman was just his first point since a goal in his first game back from World Juniors. After the game he was challenged by his head coach to be much better: “World Junior hangover’s over as far as I’m concerned,” Mike Stothers said. “It’s now time to start proving that you’re a legitimate NHL prospect and be the best player on the ice, which he’s quite capable of being.”
–Vincent LoVerde – The captain seems to find ways to lead by example when the Reign need it most. He was hard on himself in the postgame interviews, admitting being beat on the Parkes goal and needing to be better. And what was said between periods was the D needed to get shots through and his goal 1:33 into the third put Ontario in a position for the comeback. And again in overtime, he wheeled back after Dowd’s turnover and helped break up the Barracuda’s chance, taking the puck and looking up ice to hit Dowd in neutral ice. He now has seven points in his last five games and will head to the All-Star Classic to represent the Reign next weekend.

Turning point
Down 2-1 and in the midst of killing off a double-minor for high sticking to Jeff Schultz, the Reign were dominating and even getting offensive chances on the PK. That resulted in Andrew Crescenzi drawing an interference call on Julius Bergman with 2:55 to go in the third. The sides skated 4-on-4 for 34 seconds until Schultz came out of the box and soon enough Budaj was out of the net with 1:47 left. This sequence set up Kempe’s dish to Backman to tie the game.

Stat fact
–2 – Comebacks now this season against San Jose in which the Reign scored a goal with less than 2 minutes left in regulation to tie it and went on to win in overtime. On Dec. 13, 2015, Ontario beat San Jose 2-1 after a goal by Justin Auger with 1:09 left set up Kevin Gravel’s OT winner.

This and that off-ice
This game was the final one served by defenseman Kurtis MacDermid in his 12-game suspension for a check to the head on the Gulls’ Matt Bailey back on Dec. 26, 2015. He’s eligible to return to the lineup on Saturday.

Next up
The Reign hop on a plane Saturday morning and these teams will do it all over again, this time in San Jose with a 7:30 p.m. start at SAP Center.