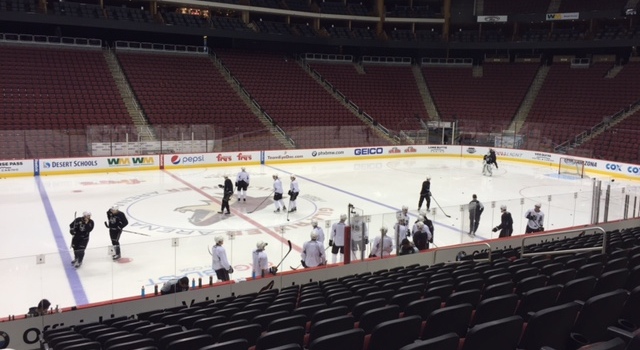 Good afternoon from Glendale, where most of the Kings have returned to the hotel after a full-team morning skate at Gila River Arena. There were some changes to the lines, as shown during rushes:

-NOT SO FAST. Though Nolan cycled through the original line rushes, he remained on for extra work as Andy Andreoff left the ice. This is similar to the scenario two days ago when Andreoff took the initial rotations but remained on for extra work, and Nolan, who was not in the initial rushes, ultimately played. With that precedent, it’s very possible that Andreoff could be back in against Arizona (6:00 p.m. PT / FOX Sports West / KABC 790 / I Heart Radio).

-It’s a back-to-back, so the #LAKingsGoalieTweetOff applies. Jonathan Quick left the ice first and is expected to start against the Coyotes.

-Speaking of the Coyotes, tonight marks the final game of the team’s season-long, seven-game home stand. Arizona won the first two games but has since dropped four straight – one in overtime to Detroit – and have scored two total goals over their last three games. They didn’t hold a morning skate, but Louis Domingue, who has been quite good in Mike Smith’s absence, is expected to draw the start. Speaking of Smith, he skated lightly and took some easy shots in net prior to the Kings’ skate as he continues to work his way back towards playing shape following early season abdominal surgery.

-Darryl Sutter quotes are up next – he was quite good today – as will a story on whether faceoffs impact possession, followed by a game preview. If I have time, I’ll also throw up a story on the void left by Matt Greene as the veteran defenseman and alternate captain recovers from shoulder surgery, but that one might wait until tomorrow. Enjoy your Saturday, Insiders. 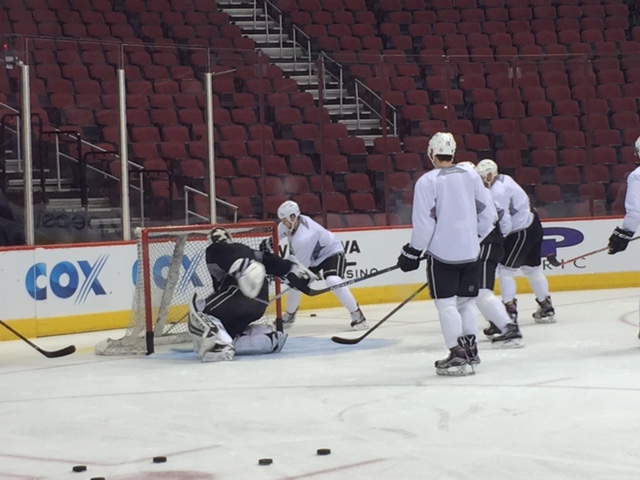