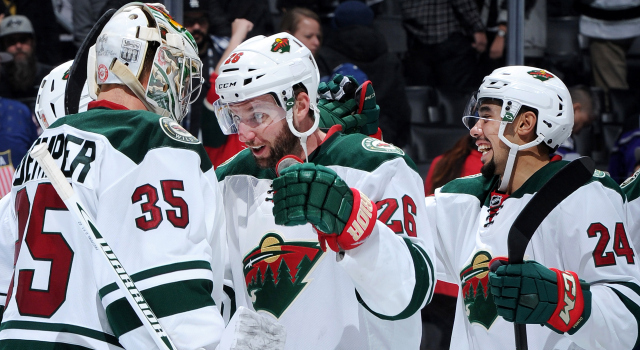 Kings-Wild games are rarely attractive games. There are plenty of teams with respected defensive credentials, but more often than not, the manifestation of this series is symbolized in games such as last night’s. There are few style points, for whatever that means in hockey (nothing), and these are two structured teams that generally do a very good job of protecting leads. It should illegal to watch the Wild nurse a 1-0 lead during a stretch of extreme scoring malaise (they had scored one goal total in the three games prior), as we saw through much of the second period. That period sealed the Kings’ fate in a forgettable 60 minutes that if anything, served as a reminder that teams don’t go 82-0, and in the doldrums of a season, you’re not always going to get performances marked by universal energy, involvement and execution from all 20 players in the lineup. These games happen from time to time, and credit should be given to the visitors, who etched out a solid road performance with a strong performance in net from Darcy Kuemper and excellent special teams. Writers on my favorite college football blog issue digital Fandom Endurance Patches to those who sit through terrible weather to watch their favorite team get clobbered; if you stayed up and blogged throughout the entirety of last night’s game and left comments afterwards in the various notes and quotes pages, congratulations! Here is your 2016 LA Kings Insider Blogger Endurance Patch. You can sew it right next to the one commemorating that early season loss to Vancouver.

Minnesota’s power play entered the game in a downward spiral and hadn’t notched a power play goal since December 28, the same day Los Angeles won 5-0 in Vancouver. Their first man advantage looked abjectly terrible, with no netfront presence or movement away from the puck. Much of their second power play was the same dreck, and then they scored on their only real scoring chance as Thomas Vanek hit Zach Parise with an excellent saucer pass over the stick of Alec Martinez, who got caught in an awkward spot. Other than the positioning miscue / Zach Parise’s invisibility cloak, the Kings handled the Wild’s power play quite well. But other than that, Mrs. Lincoln, how did you enjoy the play?

The go-ahead goal followed a first period that both teams would have been fine with. Though no goals were scored, Los Angeles enjoyed the possession advantage while Minnesota may have generated the slightly more dangerous scoring opportunities in a satisfactory road period. Both goalies were good, and Darcy Kuemper should be acknowledged for not letting in anything questionable early in a game that a desperate and offensively challenged Wild team needed to keep low-scoring. His goaltending allowed Minnesota to establish and play with the lead, which they did quite well. The backbreaking goal was obviously Charlie Coyle’s nifty chip shot over Jonathan Quick’s shoulder after some fine stickhandling late in the second period, and credit should be given to the underrated Marco Scandella, who stopped Jake Muzzin’s deflected shot dead in its tracks before lifting a lob pass up the middle to a streaking Coyle. The Wild were very good at getting sticks on pucks headed towards Kuemper and ultimately blocked 21 shots. The Kings didn’t exactly help themselves as passes careened off their own sticks in a transition game that didn’t exactly resemble a seasonal apex. 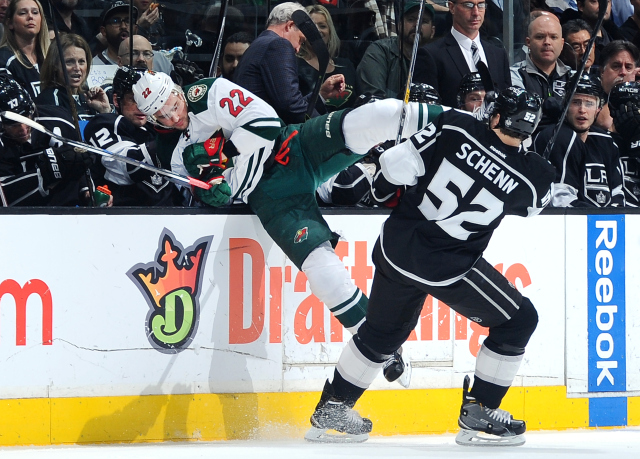