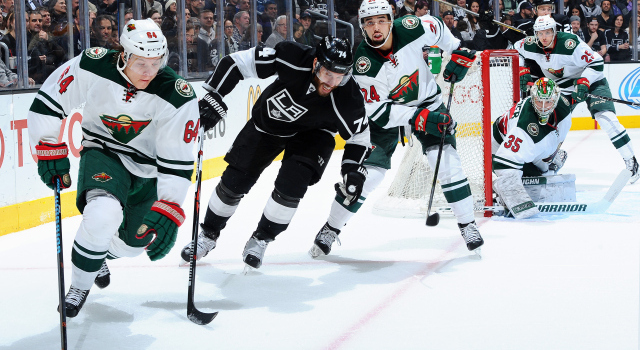 The Los Angeles Kings were not at their best Thursday night. A simple glance at the scoresheet would indicate that and save one from the experience of having to watch the Minnesota Wild nurse a lead in a whistle-prolonged game that took two hours and 37 minutes to finish and featured 67 stoppages.

While all defeats are valued the same, when a loss isn’t your run of the mill we-played-well-but-still-lost Kings defeats, but rather one such as Thursday’s in which the team struggled to sustain an offensive rhythm and constructed a performance that was clearly a step behind the two wins that preceded it, is that loss treated any different? Is there a different approach that could help spur a stronger performance while acknowledging the team’s don’t-look-backward, park-and-ride mentality?

“I guess they’re all technically a little different, depending on what you play and what you think you can improve on from the game,” Dwight King said. “Like you said, it wasn’t a very good effort in a lot of areas. I think just what you take away is the areas you can work on, obviously – checking, neutral zone, things like that. There’s more than there usually would be in a game, so you’ve just got a little bit more time to process everything that needs to be improved.”

The Wild were effective in providing neutral zone pressure on Thursday, and considering the Kings’ next opponent is the Arizona Coyotes, a team that hasn’t been among the standout defensive teams over the last two years but still has a firm, hardworking identity and has been known to successfully check in the neutral zone, are there applicable aspects of Thursday’s game that can better prepare Los Angeles for Saturday night?

“[Minnesota] had a strong forecheck and neutral zone forecheck,” King said. “I think that’s what both [the Wild and Coyotes] generate a lot of their offense and a lot of their transition off of. … We watched a little bit [of video] today and know what we need to improve on. Minnesota has a little different personnel, so things change a little bit, but I think that’s also the strength of their game, so it’s something that you’ve got to prepare yourself for heading into tomorrow.”

Dwight King, on aspects of the team’s game that can be improved:
As far as divisional games, playing pretty hard defensively I think is obviously a big focus going on the road. You’re going to probably go through adversity – every team does throughout games – so just continue to work on our checking. Like I said Arizona’s obviously a transition team, so that’s an area that will take a little more focus tomorrow, and then as far as the [San Jose] game, we’ll approach it when we get there.

King, on opposing Jarret Stoll on the ice:
It was obviously different. The jerseys, even, from the start just before camp when he was out here in New York colors, obviously it’s a different look. But it’s good to see him playing well. I think he had a solid game for himself last night. Obviously you don’t want to lose, but you can be happy for a guy. Obviously a lot of us played with him and have been through a lot of moments together, so it was good to see him.

King, on what has stayed with him having experienced Stoll’s series-clinching goal against Vancouver from ice level:
I don’t want to call it surprise, but the excitement in his eyes after he had seen it go in. I’m sure you guys have all seen a still shot picture of it, how wide they are, and the excitement coming out of him. That’s a big moment he’ll never forget, I’m sure.