Stevens encouraged by an “attentive” Schenn 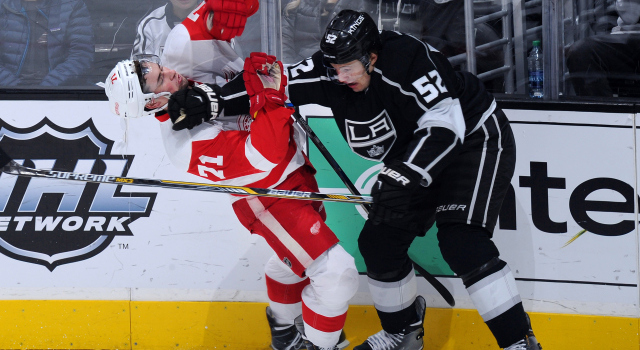 With much of the attention paid to Vincent Lecavalier and his goal scoring streak since the January 6 trade between the Kings and Flyers, I checked in with Associate Coach John Stevens to get an update on Luke Schenn now that the defenseman has played six games with his new club.

The motivation to chat with Stevens was to get a gauge of whether the coaches have a player in mind of who they’d like to see Schenn develop a partnership with, or whether they were waiting to see with whom he would cultivate chemistry. It’s a touch more nuanced than that, but at morning rushes today, the defender was paired with Brayden McNabb, with whom he has spent only 2:26 of five-on-five ice time through the first six games. He has skated primarily with Christian Ehrhoff (42:42 of 5×5 time together), who is not expected to play tonight, and Alec Martinez (40:32).

“It’s not so much who we want him to play with,” said Stevens, who works primarily with the team’s defensemen. “We’re pretty familiar with Luke coming in here and what he is and what he’s capable of, so first and foremost is getting the detail of how we play and what we expect from him – getting to know him – but I think his role is pretty simple. He’s a good first pass puck-mover and he’s a big, heavy defender. He kills penalties, he’s been in all those situations, so I don’t really pay too much attention to who he plays best with or any of that stuff, it’s more about his role and what’s expected from him, and we’re just trying to get him acclimated here with the team.”

From the eye test, he’s been pretty good other than a few speedbumps in the loss to Ottawa last Saturday. Schenn has been entrusted with key late game defensive situations and has more than adequately used his physicality to the team’s benefit, with the opening goal against Detroit two Mondays ago having been set up by a hit he made on Red Wings rookie Dylan Larkin. (The possession stats, which haven’t yet reached a revealing sample size, don’t paint as rosy of a picture, though they do come with a 93.8 PDO disclaimer.)

“He’s been a really good kid. He’s been really attentive, pays attention to a lot of detail,” Stevens said. “It was tough – he came in in a bit of a heavy stretch here, and any time a guy changes teams there’s a lot going on with family getting moved and all that kind of stuff, so just getting used to the area. But I think it was good for him that he came with Vinny. That was someone he knew well coming in here. Both of those guys have fit in well and I think they’re excited to be here. It’s still going to be a work in progress. We’ve got lots to work on, just like we do with the rest of our team, but he’s been a good addition.”