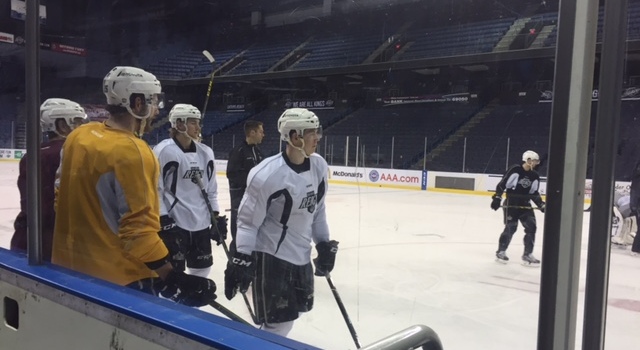 Some notes from a brief practice at CBBA for the Reign following a game day.

–The wait is nearly over for rookie defenseman Kurtis MacDermid who has just one game left to serve on his 12-game suspension. “It’s been a long time but been working hard every day,” he said. “Just excited to get back and help the team.” MacDermid will sit out Friday’s game against San Jose but then is eligible to return to the lineup on Saturday in San Jose. The 6-foot-5 blueliner has not played since Dec. 26, 2015, a game in which he was penalized for a check to the head on the Gulls’ Matt Bailey which resulted in the suspension. Head coach Mike Stothers raved about the 21-year-old and his focus and drive during the long layoff. “It’s not a real hard thing for Derm to stay focused. He’s a very driven individual. He’s always got a game face on,” Stothers said on Thursday. “So, it’s just a matter of once the suspension was handed down and the initial shock and maybe the initial anger for himself and the fact that he was going to miss so much time, you just go ahead and deal with it. There’s not much you can do about it to change it. He’s just come in here every day, he’s worked hard. Probably crossing the days off on his calendar and has the day circled when he can come back. That’s all you can do. He’s really driven. I can’t say that enough. Almost to the point where you have to say, ‘Derm, you’ve gotta enjoy it. Crack a smile. Enjoy the game. If you make a mistake, don’t take it so hard.’ He’s hard on himself. Also that’s what’s going to make him probably be an NHL defenseman is that drive and that focus and that determination. It’s a good thing to have.” In his first pro season, MacDermid has two goals and three assists in 24 games with Ontario. Although he’s missed 11 games, he said on Thursday that’s he feels ready to jump right back into a game situation because of the work he’s put in during practices and in the gym: “I don’t think it will be too much of a step for me to take.” MacDermid is known for his physical brand of hockey, so will he change anything moving forward? “I don’t think I need to worry about that I just need to keep playing my game,” MacDermid said. “It’s part of hockey and those things happen and you never want to see those things happen. I’m just not going to worry about it too much and keep going out there and playing hard, physical hockey.” Prior to his suspension, MacDermid skated all 24 games alongside captain Vincent LoVerde and the two started nearly every game on the blue line. Zach Leslie has slotted into MacDermid’s spot, but it seems as though Stothers isn’t going to hesitate bringing in MacDermid for Saturday. “We’ve got some guys that are playing well but it’s one of those things. He’s not out of the lineup because he wasn’t playing well. He’s out of the lineup for an incident. He got suspended,” Stothers said. “He’s a big part of our team. His presence, his size, his strength gives us an element on the back end that makes us bigger. You can throw him out there. You’ve got Schultz who’s a big body. Gravs, Forby, Dermy, those are some big guys. It makes it hard for the opposition to play against those guys. I’d hate to be having to go in and tell him that he’s going to sit out another game. I’m not crazy.” Certainly when the time comes his addition to the lineup will we well received. MacDermid does not hesitate to throw down the gloves and his 66 PIM still lead Ontario. “I’m out there, I’m a bigger body and I like to shut down the D zone and play a good defensive game,” he said. “Help stick up for my teammates when they need me to and that’s what I’m there for.”

–Thursday’s practice was on the lighter side, which is typical for a day after a game (the Reign defeated Manitoba 4-1 on Wednesday). “It was OK,” Stothers said. “We weren’t out there long and we weren’t doing anything specific. We just wanted to basically get a sweat on, have a good morning skate tomorrow and get ready for Friday-Saturday. The night after a game the practices usually you don’t want to do anything too system-specific. Usually their minds really aren’t engaged on it. I think it served its purpose.”

–Jonny Brodzinski’s been moving around the lines quite a bit and on Wednesday skated mostly with Justin Auger and Derek Army. “It’s not really that tough because I’ve pretty much played with everybody on the team now except Newbury actually,” he said. “It’s not too bad because you kind of get the chemistry with all the guys, really any position you get put in you can play.” During the time when Michael Mersch was up with the Kings and Adrian Kempe was gone at World Juniors Brodzinski even saw time on the first line with Nic Dowd. “At this point I’m just playing wherever coach puts me, really. Whether it’s on the first line for a couple shifts or it’s on the second line or third line. Just trying to produce,” he said. “Our line last night I think had four breakaways, including Augie’s penalty shot so we’re getting the opportunities now we’ve just got to put it in the back of the net.”

–Center Kris Newbury (mid-range injury) skated for a third straight day in red. Stothers and Newbury are hopeful he can participate with full contact next week.