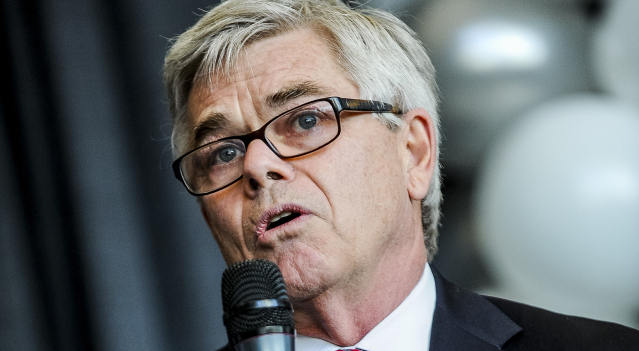 AHL President/CEO David Andrews was in Ontario on Wednesday night to take in the Reign-Moose game. Andrews said he’s on a bit of an AHL tour — “The perks of the job.” He started in Chicago, Rockford, Iowa and San Antonio and is going from here to Stockton and San Jose. It was his second time in Ontario, as he was here for the Reign announcement last year. He addressed the AHL’s move to California, fan response and how it’s helped the western NHL franchises, including the Kings, and more.

Andrews, on AHL hockey in California and how it’s affected the league:
It’s been great for the league. It was a difficult birth. There was a lot of effort put into moving this many franchises in one year to new locations in California. A lot of negotiating, a lot of hard work on the part of many people. But once we were able to put the deal together I think we all knew it was going to be good for hockey and it was going to be really good for the NHL teams that are out here that were able to bring their players closer and monitor their development better. I think there’s certainly a belief that we’re going to grow the game in California by having the American League here. I think it’s a win-win for everyone and certainly we’ve had good success attendance-wise out here through the first three months of the year. No negatives to speak of, it’s been really good.

Andrews, on why it was important to move teams West:
We wanted our partners — the LA Kings, the San Jose Sharks, Anaheim, Edmonton and Calgary — those are partners of ours in the league, have been partners for a long time who really, really, passionately wanted to move the American League out this way. The most important thing for us was to, you kind of make certain that those partners were happy and they had what they wanted. I think as they looked at the teams in the East and teams in the Midwest, the NHL clubs in those regions that had their AHL team close to them, they felt disadvantaged by having their players so far away in the East. For us, the big thing is they’re happy. And then it’s a bonus to see how well we’re doing, to see how well we’re drawing in San Diego and how well we’re doing here in Ontario and in Bakersfield. It’s really been good. Our media guys in Springfield where our head office is, they’re really amazed at the engagement we’re getting with fans out here on social media … it’s a much stronger engagement than they anticipated in the first three months of the year. The teams have done a good job of marketing and training awareness with their fans about the difference with the American Hockey League. It’s been good, really good.

Andrews, on AHL rivalries and if it’s a goal to develop them in California:
Yeah, for sure. Our league is all about rivalries, it has been for 80 years. We have so many historic rivalries in our league and I think there were rivalries developed out here in California amongst the ECHL teams when they were here. For the fans they were important rivalries. I’m sure right here they like to play San Diego and they like to play Bakersfield and Stockton. There’s a history there. I think the more you can promote the rivalries and give your fans what they want to see, the better it is. And then the flip side of that is the one thing I find when I travel from city to city and have over the years, your season ticket holders actually sometimes want more diversity of teams. So you have to get a fine balance of playing your rivals a lot of times and also giving the season ticket holders a different look at some different teams.

Andrews, on the reaction league-wide to teams moving West:
I think it’s been really positive. I think we knew it was going to be successful out here we were confident that the NHL teams that wanted to relocate would do a terrific job. The challenge was getting the deal done. Once it was done it’s not as though we were very worried that it would be successful. I would say looking at San Diego certainly, the fanbase there is somewhat surprising to me, they’ve done so well and I’ve been to a game or two there and they have very engaged fans, they’re really loving it there.

Andrews, on possible expansion out West:
To be candid, we’re not really any specific markets at this point. We don’t have teams available. We have 30 franchises active. … We’re not looking in the next year or two at other markets although if the NHL were to expand and they were to expand out West, we would expand at the same time, which would bring another team somewhere out to the West Coast. From our perspective as a league, we’re not out here researching markets. We believe that when an NHL club wants to move they’ll find a market that works for them and then move there.

Andrews, on the determination of the Kurtis MacDermid suspension:
Basically in the same way any suspension determination is made. You look at the act itself, you look at the outcome of the act, you look at the history of the player. It doesn’t make me happy to suspend players for that length. We haven’t had very many of that length over the years, I hope we don’t have any going forward because generally if you’re going to have one like that you have somebody who’s been pretty badly injured. But we move on and MacDermid will move on and he’s going to be a good player and he’ll learn from that hopefully. But the decision was not as difficult as we make it out to be. When you look at these things and you’ve done it for as long we have, I’ve been doing it for 22 years, there’s not a lot of surprises. [Reporter: When the league office makes a decision, what kind of views do you have?] You get whatever you can get. In this case in that game there was one camera angle and only one camera angle. It was all we had to work with but it gave us what we needed to see I think.

Andrews, on the possibility of a California city hosting an All-Star game in the future:
We would love to. I think Ontario wants to get their feet under them here … I think all the teams in California would like to host an All-Star game, they’ve already talked to us about it before we even came out here saying how soon can we have an All-Star game — as soon as you want. The other 25 teams would love to come out to California. So I think as soon as any of these teams feels comfortable in terms of their fanbase … I think in the first year or two other things are more important for them.

Andrews, on the new All-Star format:
We tried to look at ways where we could make it more fun for the players and more fun for the fans, make it more competitive. I think when you play a regular hockey game as an All-Star game with six — a goalie and five skaters — they’re not going to hit each other. They don’t want anybody to get hurt and they try to put on the best show they can for fans but with that many people on the ice it becomes a very static game. No contact, they’re playing a zone defense and skilled guys are just standing around trying to get through the zone to make a good play and it’s just not as exciting and dynamic as it could be. So when you think about when you watch 3-on-3 in overtime or 4-on-4, there’s not contact, right? It’s a wide open, exciting style of play and we think with these mini games we might get a really good competitive effort from players because they’re not expected to hit. They’re expected to play with skill and speed. We’ll see, it’s a bit of an experiment but hopefully it’s going to be good.