Waking up with the Kings: January 18 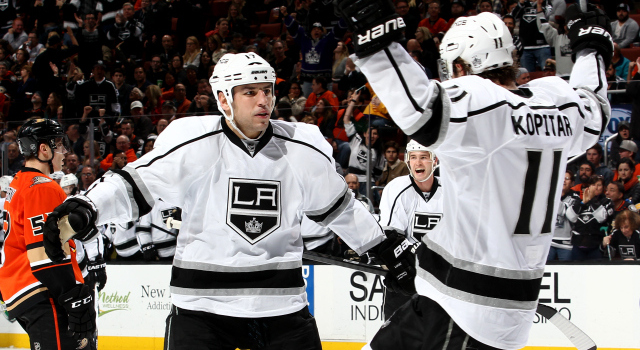 The Kings scored big goals that allowed them to play with the lead for much of the night in a physical, tight affair that resulted in a 3-2 road win against their regional rivals to the south Sunday evening at Honda Center. There was some holding on for dear life at the end of the game, but the Ducks, the defending Pacific Division champions and a third round playoff team a year ago, will wage a steady attack when trailing, and eight of the last 10 games between the teams have been decided by one goal. Los Angeles struggled to protect leads in that building a year ago, having ceded nine third period goals to Anaheim in three road games, and while the home team nearly potted a pair of third period pucks to tie the game, it was clear that Andrew Cogliano’s would-be equalizer was propelled into the net with a distinct kicking motion that was difficult to detect in real time but required only one replay to illustrate that it was a clear kick, and not even a not-enough-evidence-to-overturn call. It was not a good goal; there was no controversy.

Anze Kopitar’s line was excellent and was the clear victor in the frequent match-ups against Ryan Kesler’s line. That was not always the case last year, when Kesler was probably the most impactful player in the season series. Kopitar had a goal and an assist in a plus-two effort, was the only Kings forward to record multiple shot blocks, and took 30 faceoffs in a quality performance on the second night of the back-to-back set. While Milan Lucic hasn’t been scoring regularly – he hasn’t yet scored in the current calendar year – he has assists in four straight games as Tyler Toffoli has served as that line’s most frequent finisher. It was only a matter of time before he began to generate chemistry with Kopitar, and while there is still room for improvement, that line has been strong thus far in the new year.

If we’re going to acknowledge a few individual performances from last night’s game, credit Brayden McNabb, who issued a devastating and legal shoulder-to-shoulder check on Sami Vatanen that left the skilled Finnish defenseman in a heap on the ice. He made a nice shoulder shimmy on David Perron to create an opening and wristed a puck towards the net that Anze Kopitar deflected through the narrowest of spaces for the team’s game-winning goal. Alec Martinez weathered several big hits in a gritty 23 minutes of action in which he blocked a game-high four shots. Vincent Lecavalier scored for the second consecutive game and took 19 faceoffs over 15:31 of ice time. His four shots on goal led the club. A day after an off performance, Jonathan Quick again showed that with his constitution, it’s more or less a given that he’ll follow up a loss with a strong performance. He has lost consecutive starts twice this season: The first three games of the year, and starts on November 2 (at Chicago) and 5 (versus Columbus). With Jhonas Enroth having played for Dallas last season and the Kings in a six-games-in-nine-nights stretch, it will be interesting to see if Darryl Sutter gives him a night off against a top Western Conference team tomorrow evening.