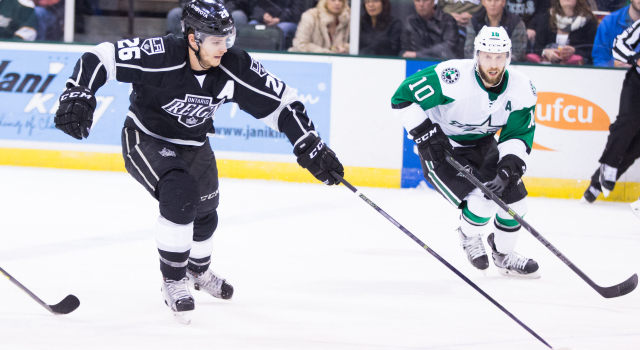 Reign game breakdown
Andrew Crescenzi scored a power play goal with 23 seconds left in regulation and the Reign finished off their three-games-in-three-days weekend in dramatic fashion with a 2-1 victory over visiting Texas on Sunday. Crescenzi jammed the puck by Stars goalie Philippe Desrosiers to give Michael Houser a win in his first start in net for the Reign after watching from the bench for 16 straight since joining the team in early December. The Reign fell behind 1-0 after Houser made an errant passing play, allowing the Stars’ Jason Dickinson to shoot into an open net at the 13:38 mark of the second period. Nic Dowd scored the equalizer 6:33 into the final period for the Reign after a point shot by Vincent LoVerde hit traffic in front and landed where he could get it by Desrosiers for his 8th of the season and third in two nights. Both teams were playing a back-to-back-to-back sequence, the only difference was Texas (21-15-3-3) being on California swing with wins over Bakersfield and San Diego on Friday and Saturday respectively. For the Reign (21-10-2-1), they officially reached the half-way mark of the season by picking up four points in the long weekend stretch after defeating San Diego on Friday and falling to Bakersfield on Saturday.

Best quote
Reign head coach Mike Stothers, on what he thought of Houser: “I thought he was good. It’s too bad he didn’t get a shutout. Just got to work on that puckhandling skills.”

Three stars
–Andrew Crescenzi – The 6-foot-5 center sure did pick the right time to score his biggest goal of the season. The game-winner was his third goal and he mentioned after the game that he was happy to be getting the call for some power play time late and he rewarded Stothers for his decision. Crescenzi plays tons of PK minutes and the Reign finished a perfect 5-for-5 in that department.
–Michael Houser – If not for his own blunder, Houser earns a shutout in his first start against a high-powered Texas team that came in averaging 3.85 goals per game. Still, the 23-year-old didn’t look out of place or out of position in finally getting the nod after watching Peter Budaj’s goaltending skills from the bench over and over and over again (his last game played was way back on Nov. 27 of last year for the Manchester Monarchs). Houser, who was told after Saturday’s loss that he would get the draw for Sunday, made 21 saves.
–Nic Dowd – Dowd scored four goals in the three-game weekend and had the tying goal in the third period against the Stars off a rebound after Michael Mersch provided a screen in front on a Vincent LoVerde shot from the right side. Stothers mentioned after the game that Dowd’s play has increased of as of late as his minutes haven’t had to be over the top with a healthy lineup (Mersch’d lineup).

Turning point
–Mersch was very Mersch-like. The left winger’s great individual effort late in the third, driving around Greg Rallo and forcing him into a hooking penalty, set the stage for Crescenzi’s winner. Playing in his third game since his return to Ontario after being sent down by the Kings on Friday, Mersch had just one point on the weekend but factored into both goals tonight in some way (screen on shot before Dowd’s goal, and drawing Rallo’s hooking call).

Stat fact
–2 – Assists by LoVerde against Texas as he finished the weekend with five points.

This and that off-ice
Rookie forward Jonny Brodzinski was scratched for the first time since a Dec. 5, 2015, game vs. Charlotte. … Defenseman Kurtis MacDermid served the 10th game of his 12-game suspension for his hit on the Gulls’ Matt Bailey on Dec. 26, 2015.

Next up
Manitoba comes to town on Wednesday for its first visit to Ontario of the season. It’ll be a 7 p.m. puck drop. The Reign are 2-0 against the Jets affiliate, beating them very early in the season in their 2nd and third games.