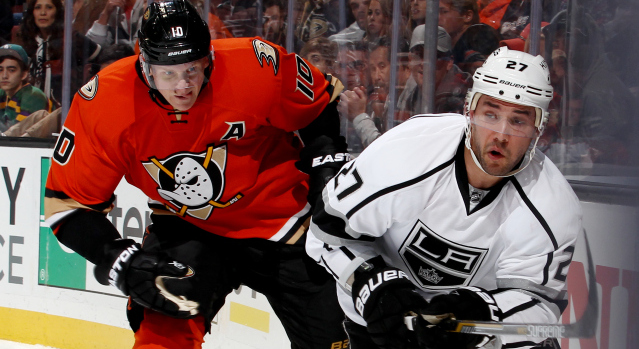 Alec Martinez, on whether it was an “emotional win” for them:
Well obviously the first time playing these guys, which I don’t know if I’ve ever really gone through that before in terms of scheduling, but it’s a big division game, big rivalry game. We play these guys five times and you know that these are going to be battles. We obviously have a history between playing each other in the playoffs and just being down the road from each other. So it’s always a battle. In order to get a good win in their building, it feels good.

Martinez, on whether the win after yesterday’s loss shows the team’s character:
Yeah for sure, we talked about that after the second. You know, learn from yesterday. I think we did that. I thought we played a good 60 minutes and we faced some adversity there. We had some big PKs and we had a big power play goal in Vinny. So that’s what it’s going to take and we’ve been around, this core group, for a while. So we know that things like [what] happened yesterday can’t happen.

Martinez, on whether it was an especially physical game:
Oh yeah, every time you’re going to play Anaheim it’s going to be a physical battle. It’s usually really physically, chippy, you saw a couple fights there. That’s normal for our two teams.

Martinez, on whether they had to rely on Jonathan Quick too much in the third period:
I don’t know. That’s your opinion, not mine. Obviously Quickie comes up big for us all the time and he made a lot of big saves tonight. He’s a huge, huge part of our team.

Tyler Toffoli, on whether he’s happy with their performance in the victory:
Yeah, it was good. It was a good bounce back game for us. We came out, scored a big power play goal and got the win like we wanted.

Toffoli, on what his line with Anze Kopitar and Milan Lucic did to change momentum:
I think we had our legs and we knew that we were going to get some chances and we capitalized on our chances when we started cycling down low and getting pucks to the net and our D did a good job getting pucks through and that’s what created our chances.

Toffoli, on the intensity of the game:
It’s always tough when we play them. This rink is usually pretty loud. There’s a lot of Kings fans in here for us, which makes it a lot easier for us to play here. But we had a mindset of beating these guys. It was the first game against them this year and I think we did a great job tonight.

Toffoli, on what he’s seeing from Anze Kopitar that is making him so effective:
I think just getting pucks down low. He’s so good at holding onto pucks and kind of draws more attention to him, sometimes two guys, which makes it easier for me when I can kind of find a little bit of open ice and he’ll find that little soft spot and give me the puck.

Vincent Lecavalier, on playing tough minutes in key situations:
I wish I would’ve won that last draw. I mean when you’re put out there with a minute [remaining] you want to win that draw. When you lose it clean, it’s not good. But it’s good to have that opportunity and next time I’ll try and win that draw. We got the win but that first job is to try to win the faceoff and it’s good to be in those opportunities, for sure.

Lecavalier, on how he feels after scoring goals in back-to-back games:
I’m feeling good. Yesterday, it was just nice to get that first one out of the way. [Reporter: Not many guys could put that up over the goalie from the angle you were at. Let’s be realistic.] Well, there are a lot of guys on this team that can, for sure. But no, listen, it was a long time since I scored and it was just nice to get it in and it builds on confidence. Even tonight, I felt my… after something good happens, your confidence builds and you hold the puck a little longer, you make better decisions and I think I want to, it’s only been five games, but I’m going to try and build on that. I still have to get better. But every game is high-tempo and it’s a great hockey game. So it’s a lot of fun, for sure.