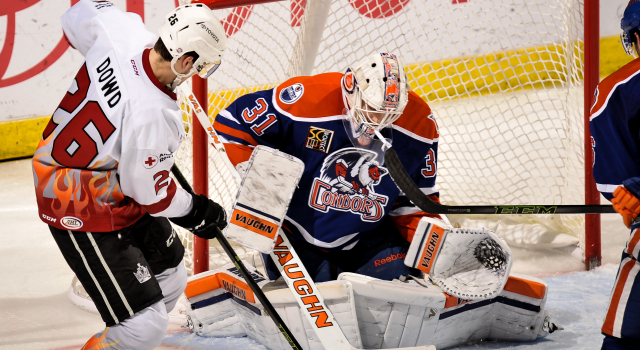 Head coach Mike Stothers, on the poor start:
A brutal first period. We picked it up, but again you’re coming from behind and ultimately the game was decided on a shorthanded goal. So, that’s kick in the backside. [Reporter: Can you put your finger on why the rough start?] No, actually. Again, we played real well last night and everybody’s feeling good about themselves. I don’t thinking anybody prepares any differently. Maybe some of the credit goes to Bakersfield. Maybe the fact that they lost last night, they came in with a little bit of a burr in their saddle and figured they’d start quick. We were on our heels. That’s never a good sign.

Stothers, on the power play’s struggles:
We’re having a hard time just getting up the ice. I don’t think so much for once we finally get it into the zone. But holy smokes. Yeah. We’re struggling with that so we’ll work on it and get ourselves better. Power plays and penalty kill, they win ya and lose ya hockey games and if you want to continue to win your special teams have to come through.

Stothers, on the shorthanded goal:
It turned out to be the game-winning goal. Empty-netter, big deal. Shouldn’t even have yourself in that situation. Should never be getting scored on when you have a power play and it turns out to be the difference in what ultimately is a one-goal game.

Stothers, on Dowd’s play tonight and lately:
It’s nice to see him finding the back of the net. I think he’s got eight goals now, which is good. We need that. He seems to be shooting more, which is good for us and for him. He’s getting himself in the right spots, which is good. He’s a pretty fearless guy so it’s never been a problem of him getting into the dirty areas, he just likes to hang on and pass the puck so much. He’s what you would call your ultimate playmaker. So, it’s sometimes hard to convince those guys that get more satisfaction out of passing and seeing somebody else score than themselves. We talk regularly. Gentle reminders. Hopefully it continues.

Stothers, on preventing a bad start tomorrow and finishing out the weekend:
I just went in and said, you know what, we get the one tomorrow it’s four out of six points. That’s a pretty good weekend for us. It’s obviously not what we started out to get on this weekend, but you have to try and salvage something. You know what, it can still be the glass half full and that’s what we’ll try to do for tomorrow.

Stothers, on Lowry slotting in for Zykov and if it was just a rotation situation:
Yeah. We’ve got guys. I’ve mentioned it before, I don’t like the young guys to be sitting too long. I’ve really liked Lows, what he’s brought to the team and what he brings and what he does. It’s just a lot of hockey and let’s get everybody busy.

Stothers, on Forbort’s second (sort of) fight in two nights:
I don’t think they called it a fight, I think they called 3 for roughing. I think the ref worded it it was two guys grabbing each other. So, I’m going to go home and look that up in the rulebook. Not sure what category that falls under, grabbing each other. [Reporter: Maybe have Biss give Forbort some pointers?] You’ve got to start somewhere. When you look at it, you’ve got to tip your hat to him. It doesn’t come easily to him, it doesn’t come naturally to him and it’s not like he’s picking on a couple of cotton balls out there. Last night it was Ritchie, tonight it was Moroz. C’mon, again, the glass is half full. Let’s keep it positive.

Nic Dowd, on the poor start:
I think it started the first four shifts of the game so that’d be each line was slow and not good out of the gate. They take advantage of it, they score early off a faceoff and then they score a power play goal and that’s what good power plays are going to do. I think, obviously, we just have to be better off the start. We had a great night last night, that doesn’t mean anything tonight.

Dowd, on what was said between the first and second periods:
Stuttsy just let us know, like I said, that we won 5-0 the previous night the team coming in doesn’t care. It’s got to be about consistency and guys got to be ready to go. It shouldn’t take a period and then people yelling at you to get you going. Otherwise, teams are too good in this league, you’re going to be behind and it’s tough to get, obviously it’s tough to get back in the game. You see that.

Dowd, on the shorthanded goal:
Even if you don’t score on the power play it’s got to be momentum. You’ve got to gain momentum off of that and obviously we did get the goal after which is huge but that was the difference, was that third goal. So, the power play goal was basically meaningless, the one we scored later. It can’t happen … guys that are out there have to take it upon themselves not only to go out there and score goals and make things happen and gain momentum, but the last thing you have to do is let the other team gain momentum.

Dowd, on why the Reign have had a tough time vs. Bakersfield:
I think our starts. We’ve been hurting ourselves a little bit. I think our starts have been poor. They were poor once we played them in Bakersfield and they’re a good team. They’re going to take advantage of that and they came out hard tonight and more power to them that they played well in our arena on Saturday. I think they do a good job of staying over top of our centers and our wingers on the breakouts. We like to come up five men connected and they make it pretty difficult. I think later in the game we started backing them off a little bit with chips off the glass and gaining our speed. We’re a tape-to-tape team and that’s what we want to do but they did a good job of shutting down lanes tonight.

Dowd, on his play as of late:
I just think overall with the minutes that I’m being fortunate enough to get throughout the year, I think a lot of responsibility is going to fall on our guys that are playing those minutes and playing in those opportunities. Not just me, but across the board. And we need production. We have to score goals. We went through a skid there where we only scored 1-2 goals in three games. Budes has been playing lights out all season. I think he’s been our best player and we’ve got to help him out, we’ve got to give him some run support.