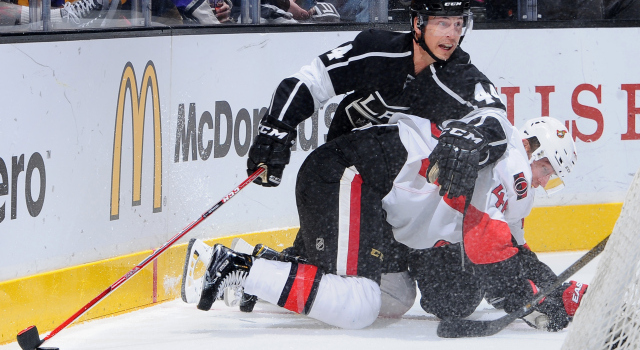 On the loss to Ottawa:
I think we were lucky to ever have the lead in the game. [Reporter: Why so?] We had lots of guys just playing shinny out there.

On what Jeff Carter means to the franchise:
We got him, I believe, in the first year that we won the Stanley Cup, so since he’s been here, he’s been to the conference final and two Stanley Cups.

On an “uncharacteristic” loss:
We’ve been playing sloppy for quite a few games now. I think we’ve used fatigue as an excuse the last three or four games, and I we didn’t get much from top to bottom today.

On whether he would’ve preferred another game this week, given the schedule break:
No, I’d like to only play one game a week, but I’d prefer to win it. Just like the NFL. That would be my preference. It’s not the way it works.

On Vincent Lecavalier’s first goal as a King:
Yeah, it was a power play goal. I don’t know if the line did anything five-on-five at all.

On how a team works sloppiness out of its game:
Usually you get your nose rubbed in it, but you know what? It’s going to happen once in a while. As long as it doesn’t happen consistently – usually you’re on the wrong side of the fence, then.

On Anze Kopitar’s extension:
I think that it wasn’t breaking news. [Reporter: But his worth to the franchise and having him locked up for such a long time and being able to keep the core together.] The bottom line with a guy like Kopitar is his best years are in front of him. Guys get rewarded for winning Stanley Cups and when they’re with one franchise for that period of time when you’ve won Cups, then everybody’s looking forward to the next part with them. [Reporter: But 80 million dollars is a stunning number, right?] It’s a lot. When you think about it, when the salary cap years started probably, [that’s] what the whole cap was when it was first put in place. He’s worth every penny of it. It’s got nothing to do with that. You win championships with players like that. Very, very clear. He’s worth every penny. [Reporter: What’s the most you ever made in a season?] I don’t know. I don’t like talking about that. I don’t know. They get more in one check than what we used to get in a whole year.