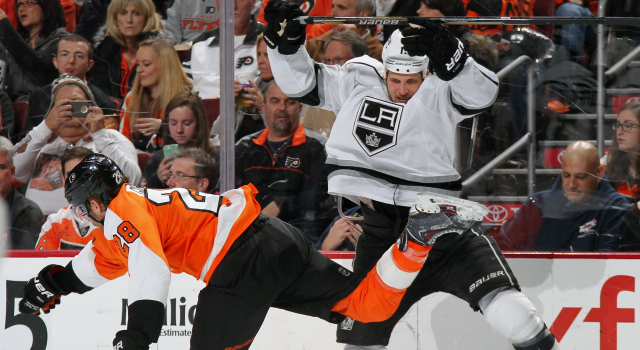 On Thursday, two days prior to the team’s 43rd game of the season, Kyle Clifford took part in the most unenviable of skates: The one without any teammates.

Clifford, now five and a half weeks into his attempt to return from an upper-body injury suffered when Tampa Bay’s Victor Hedman elbowed him in the face on December 6, has progressed to the point where he’s able to get geared up, take shots on net and build his conditioning late in Kings practices, but is still mostly confined to his own checklist of hurdles to clear in his attempt to return from the injury.

“We’re just following protocol and obviously taking it one day at a time. It’s just one of those things that you’ve got to be patient with,” he said.

That’s a positive note, but it is off-putting to think about the types of injuries the rugged power forward has endured in his NHL career. Clifford has only been publicly diagnosed with a “concussion” once as a King – that was on Byron Bitz’s boarding major in the 2012 first round series against Vancouver – but suffered a “head” injury in a March, 2011 fight with St. Louis’ Ryan Reaves and an “upper-body” injury in a November, 2013 game against Vancouver in which Darryl Sutter told reporters “he got his bell rung.” The veteran of 382 NHL games turned 25 on Wednesday.

“You kind of know what you’re getting into,” he said of the process of returning from his injury. “You know it takes time. It’s something you’ve just got to be patient with. I think over my career, the training staff’s done a great job. Any time I’ve come back, I’ve been a hundred percent. There’s no concern there.”

There are still more steps to take before he’s able to return to the lineup, but he’s confident that he’s on the right path to being able to rejoin the team in practice relatively soon.

“I was hoping that five and a half weeks ago, but like I said, we’re following protocol,” Clifford said. “My goal is to get back with the team and help them out as much as I can.”

It’s a frustrating lull in a season in which he has totaled three assists through his first 26 games. Though the numbers don’t jump off the page, his work ethic and abundant energy had been praised by the coaching staff as he continued to fulfill a similar role to the one he crafted when joining the team as a teenager in 2010-11.

The team has been winning games in his absence, going 10-4-2 since he left the lineup.

“It’s tough,” Clifford said about his injury. “You look at any guys that had long injuries – look at Kinger, he sat out half the year – we’ve all gone through it in our career. It’s been nice watching the team win. That makes it a lot easier.”

And though the time apart stings, there’s no ill will towards Hedman or disappointment that the play went undisciplined beyond the assessment of a two minute elbowing minor.

“It is what it is. There’s nothing you can do about it. The league made their decision,” he said. “It’s in the past. Maybe if you had asked me five weeks ago, I might’ve had a different answer. But I think with our team, we’re always looking forward. That’s our focus right now.”