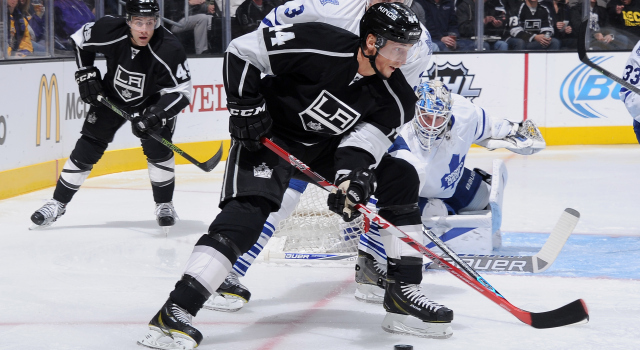 While much of today’s news was KOPITAR KOPITAR KOPITAR, there were still plenty of other topics surrounding the Kings’ recent play worthy of addressing, and one of those subjects is Vincent Lecavalier, who has accounted for one assist and a plus-one rating while averaging 11:32 of ice time through his first three games with his new team.

“I think the first two games I felt really good,” he said. “I think like Darryl said, he’s going to monitor my minutes, and it was good because I hadn’t played in like two months, so to play 10 minutes the first two games was perfect, I felt good, my energy level was really good. I think the third game was kind of, I played a little bit more so I kind of felt that one. It was tough, it was a grind. I have to admit the third game was a grind, but I try to really stay on little details, like defensively I try to focus in on a lot of things, and I think offensively I wasn’t as sharp as I could have been, but you know, Kopi obviously took care of all that. It was good, the first two games high energy, the third game was tougher because of more minutes, haven’t played in a while, but I think a week here of – it’s kind of like the perfect timing, to get back into it get some good practice in, like an hour up and down, get that energy level ready for the next game, but yeah it’s been good.”

Lecavalier spoke with reporters for several minutes after practice. His quotes are below.

Vincent Lecavalier, on when he’d know he’d be in the lineup in his debut:
That same day when I got in. I got in like at 12 probably, and they said, ‘do you want to play,’ and I said, ‘yeah, let’s do it.’ I took like an hour nap and when I woke up I’m like, ‘oh my God, my legs.’ You know we woke up so early in the morning but I ended up feeling really good, I felt good with the puck, I felt I was really engaged, so it felt good.

Lecavalier, on the first trade of his career:
When I first signed I thought I would finish my career in Philly obviously, but things happened, the way things have been the last year, year and a half, and I couldn’t wait to get a trade. To hear just a few days before that it was going to be the LA Kings, or potentially the LA Kings, I was really excited.

Lecavalier, on whether he’s reconsidering his decision to retire after the season:
I mean, I don’t really want to talk about it everyday, but yeah, I’m planning on doing that this summer, so yeah, I’m kind of going in the present right now. I don’t want to think about it in five months, I want to think about getting better now and the little things that I did the first three games that I can do better and try and do that in practice. It’s been going pretty well, so I’ve got to keep it going.

Lecavalier, on winning 13 of 16 faceoffs Monday night:
I think that’s something Darryl focuses on. It’s a commitment when you get to a draw and it’s something that this team focuses on and I try to do my best to keep it up.

Lecavalier, on any extra appreciation of playing with Anze Kopitar:
Yeah, I mean just from being in the East you don’t see him, I know he’s really good and he’s one of the best in the league, if not the best centerman in the league, but when you play with him, the little things you see in your teammates, it’s pretty incredible, he really is. Defensively he’s solid, with the puck he’s amazing, I mean just the way he goes around guys, how strong and big he is, I never thought he was 230, he’s just so big and strong, but at the same time he’s got the hands of a Datsyuk, so it’s pretty amazing, it’s impressive. [Reporter: Pretty nimble zone entry on that zone entry before the Martinez goal the other night.] Yeah, the little spin-o-rama. I saw it after, actually, on TV. He’s just so smooth, great leader too, and you never really know guys, like how they are in the locker room and stuff like that, but he’s got that presence. Just the way when he talks, guys are really listening. He’s a pretty complete guy, for sure.

Lecavalier, on advice for a player nearing unrestricted free agency:
I think he’s been that guy for a lot of years, so I think it’s just a process. I remember when I was signing five, six years ago, people were like, ‘well, why isn’t he signed’, well it’s a process. Every player is different, every GM is different, and I think – I’ve only been thrown in here in the last week – it looks like everyone is on really good terms, so the only thing I can say is it’s a process, I don’t know anything else. [Reporter: I just meant like if you had advice to your younger self as him, along those lines.] Just go along with the process. I think, from what I’ve heard, he’s letting his agent do it. I know I’m saying all the clichés of that, but I mean, that’s what it is. I think he’s focused on the game. It doesn’t seem like it’s been a distraction for him.