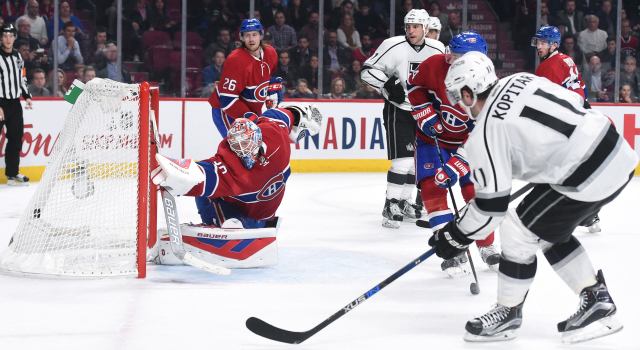 The Kings didn’t take the ice on Sunday, opting instead for a quieter morning as meetings were held and players received treatment in between home games against the St. Louis Blues and Detroit Red Wings. Considering the home stand kicked off with the Toronto Maple Leafs visiting, it’s very much a Norris Division feel in the schedule.

“We have Minnesota this month, too,” Darryl Sutter said. “Not the North Stars.”

Sutter shared some thoughts on communicating with officials earlier today, and I’ll share those sentiments along with a pair of conversations Jim Fox and I had with Brayden McNabb and Jake Muzzin. But because the team is through exactly half of its schedule – and with 26 wins have equaled the most wins through 41 games in franchise history – I got Sutter’s take on what the story through the first half of the season has been.

“We wanted to be in the race, not chasing a bunch of teams. Our goal coming out of camp was exactly that,” Sutter said. “We wanted to be a playoff team, and we wanted to stay in a playoff position, and that still has to be the way we look at it. We’ve used a lot of different guys already. The way we set this season up was because he had so many extended trips and back-to-backs, we took some of what we had done good or bad from last year and seen if we could increase or get better at it. For the most part, we’ve done that. There are three or four team stats that we feel that we could be further ahead with. Some of that’s personnel-related, obviously, but that’s also the challenge of those player that have come in to help us with that. We’ve seen some improvement in some areas, and some areas we’re still looking for.”

“I think our third and fourth lines, we haven’t gotten a lot of production from them, when you look at it, and if you’re breaking it down on what you should get if you just do it strictly on a points basis or a goals basis, what that line should produce or that line should produce, we’re probably still quite a bit under that. With the defense part of it, I think it’s on record enough about getting more out of our third pair in terms of quality minutes. We’re thinking that somehow Luke will – wherever he ends up fitting – gives us a better balance there. It should get more quality minutes out of other guys. I think there’s too much put on total minutes or how much Drew played tonight. I don’t think that has anything to do with winning or losing. I think that it’s still about quality, and less is more a lot of the time. The staples of our game are still in place. It still works around Quick and Doughty and Kopitar and Carter, and I think Looch has really jumped into that part of it for our team. That’s still what it works around.”