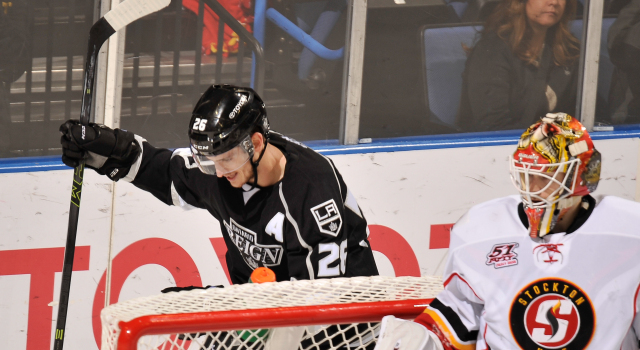 Reign game breakdown
Welcome back, Adrian Kempe. Welcome back, Reign offense. Ontario had one of its most impressive offensive performances of the season on Friday night in a 6-1 rout of the visiting Stockton Heat. Kempe had a goal and an assist in his return after his extended stay at the World Junior Championships, Nic Dowd and Sean Backman each had a goal and two assists and Ontario’s special teams took over the game in commanding fashion. After going 29 games without a shorthanded goal, the Reign (19-8-2-1) collected an unprecedented two (Andrew Crescenzi and Backman) against the Heat (12-15-1-2). The power play also finished at 50 percent (2-for-4) on goals by Dowd and Kevin Gravel. If not for one of the more bizarre goals we’ve seen all season, goalie Peter Budaj would have picked up a shutout in his 15th straight start.

Best quote
Reign head coach Mike Stothers, on Kempe’s play in his return and what he brings to the table: “He comes in, what did he have, a goal and an assist tonight? And suffering from jet lag. … He’s a young guy, he’s exciting. He’s prototypical of what an athlete should look like. He can skate, he can shoot, he can pass, he thinks the game. He’s got some good size, he’s strong. The only thing that he needs is experience, I think. And I think soon he’s going to be playing in the NHL.”

Three stars
–Adrian Kempe – Jet lag? Not so much. All eyes were on Kempe in his return after missing eight Reign games while playing for Team Sweden at the World Junior Championships in Finland. His team averaged just 1.625 goals in the games he was out, so Kempe’s speed and skill were a welcomed sight against Stockton. His addition (skating with C Derek Army and RW Backman) gave the Reign noticeable depth on all their lines. His beautiful setup pass to Dowd on a 5-on-3 man advantage “was something we were missing,” said Dowd afterwards. Kempe one-timed his goal, his eighth of the season off feed from Army at 4:39 of the third, and gave the glass a good bang in celebration after the fact.
–Nic Dowd – The center’s great read in the offensive zone to steal of Oliver Kylington’s breakout pass set up Jonny Brodzinski’s rebound goal to put the Reign up 1-0 midway through the first period. Again, Dowd played a factor in hammering home a cross-ice pass from Kempe on a 5-on-3 power play in the second period to give the Reign a 3-0 lead at the 6:04 mark. The Huntsville, Ala., native has been steady all season, but now he has multi-point performances in back-to-back games for the first time all season.
–Peter Budaj – Chosen as an AHL All-Star a day prior, Budaj was simply outstanding on Friday, stopping 23 shots to pick up his league-leading 18th win in his 16th straight start. The only goal he did give up wasn’t noticed the first time around, and had to be reviewed, eventually being credited to Drew Shore with 3:00 left in the second. Stothers characterized his play as, “unreal.” Although this game ended in a blowout, Budaj had some remarkable saves, including a pad save on a Turner Elson breakaway in the middle frame.

Turning point
–Puck drop. The Reign are a completely different team with Kempe in the lineup, and when you factor in the addition of Derek Forbort on defense, there’s a major difference in all three zones. Forbort was reassigned by the Kings to the Reign on Wednesday and played on Friday mostly with Kevin Gravel, who he was paired with last season when the team was the Manchester Monarchs. After the game Stothers said Forbort, “gives us an NHL-caliber defenseman.” Forbort didn’t have to be outstanding, but he was noticeable on the back end.

Stat fact
–5 – For the longest time, the story was how this team was doing without Michael Mersch. Could the Reign score without the left winger, who’s now with the Kings but somehow still leads the Reign with 12 goals? Before Friday, the last time Ontario scored five or more goals was actually Mersch’s last game in the lineup, which was over a month ago on Dec. 6, 2015, a 5-1 win at Charlotte. If anything, Friday’s scoring surge at least proved to be a confidence booster and proved that the Reign are still capable of doing big things offensively without No. 27.

This and that off-ice
Center Kris Newbury missed his fourth straight game with what Stothers has characterized as a “mid-range” injury. … Rookie defenseman Kurtis MacDermid is now halfway through his suspension as he served his sixth of 12 for his hit on the Gulls’ Matt Bailey on Dec. 26, 2015. … Defenseman Nick Ebert was out of the lineup after missing practices Wednesday and Thursday with what he called an upper-body injury.

Next up
Ontario makes the hike to Bakersfield on Saturday to play the Condors in a 7 p.m. matchup. The Reign are 4-1-0-0 against the Oilers affiliate this season and most recently beat them 2-1 in overtime on Sean Backman winner on Dec. 20, 2015.