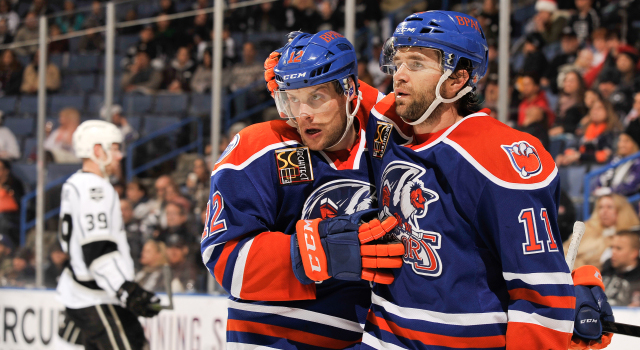 Reign game breakdown
A day removed from one of their best offensive performances, the Reign traveled to Bakersfield and were shut out for just the third time in a 4-0 loss to the Condors (14-13-2-2) on Saturday night. After a scoreless first, Bakersfield took over the game with a three-goal second period, highlighted by two Jordan Oesterle tallies. Discipline issues crept back in for Ontario (19-9-2-1) as the team took seven minor penalties and Paul Bissonnette was handed a 10-minute misconduct midway through the third for unsportsmanlike conduct. Bakersfield goalie Eetu Laurikainen stopped all 30 shots he faced to earn a shutout in his first victory. Reign goalie Peter Budaj gave up four goals on 33 shots.

Three stars
–Jordan Oesterle – The Condors defenseman broke a scoreless tie, putting the Condors on the board at 12:57 of the second period on a shot from the slot. After the Reign were already down 2-0, he scored again on the power play late in the second period on a laser from the point. The goals were his first and second of the season.
–Matt Ford – Ford kept the Reign reeling in the second period, scoring less than two minutes after Oesterle’s first goal. He picked up his own rebound to beat Budaj for his 16th of the season, tied for best in the AHL’s Western Conference. The West Hills, Calif., native also played a part in rattling Budaj that same period, knocking off the mask of the Reign goalie, resulting in a goaltender interference call. Budaj typically keeps his cool but was visibly upset after the play.
–Eetu Laurikainen – The Condors were also playing a second of a back-to-back and turned to the services of Laurikainen. The Finnish netminder had not started in a game for Bakersfield since … Oct. 17 of last year, a loss to San Jose where he surrendered four goals. He picked up the shutout in just his second game of the season, making 30 saves and standing strong in the third period when the Reign had 15 SOG.

Turning point
–Already down 2-0 late in the second period, Reign captain Vincent LoVerde was forced into a holding penalty to take down Andrew Miller, who was streaking with the puck on his stick toward Budaj. Then, just nine seconds into that man advantage, Oesterle blasted his second past Budaj. The Condors improved to 12-0-1 when taking a lead into the final period.

Stat fact
–2 – Maybe it’s just something about Rabobank Arena. The Reign have been shut out just three times this season, but two of those three have come in Bakersfield. The other was a 3-0 defeat on Nov. 14, 2015.

This and that off-ice
The Reign were still missing center Kris Newbury, who was out for a fifth straight game with what head coach Mike Stothers has characterized as a “mid-range” injury. … Rookie defenseman Kurtis MacDermid served the seventh game of his 12-game suspension for his Dec. 26, 2015 hit on the Gulls’ Matt Bailey.

Next up
After playing seven games in 12 days, the Reign will get some much needed time off in that department. Their next one will be next Friday, Jan. 15, in a much-anticipated matchup against the San Diego Gulls, the Ducks’ AHL affiliate. The last time the two rivals met resulted in a 4-1 loss for Ontario and was the game in which MacDermid delivered the hit that resulted in Bailey reportedly suffering multiple facial/jaw fractures. The Gulls hold the season series edge at 4-1, with one victory being in a shootout.